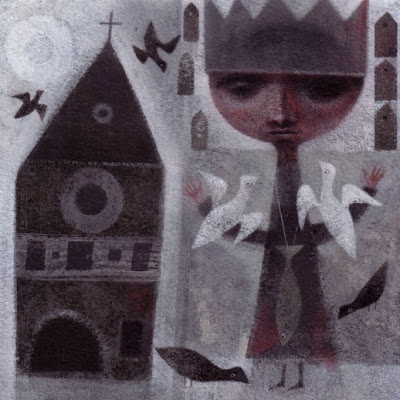 Painting: Graham Ward, "King in Finisterre."
*
Today I wrote the 100th poem of The Book of the Red King. In the fall, Graham Ward's paintings reminded me of a Red King story I had written a year or so before; Graham also likes fools, and I had fooled with fools before as well.

And somehow on October 17th of last year, I started writing madly about the Fool and the Red King and Precious Wentletrap and the blossom Queen and many another character. Some days I wrote three poems. One day I wrote five. It has been a delicious insanity.

100 is round. Perhaps I am done. Perhaps not. Only the Fool can know, and he can only know when he knows. And when he doesn't know, there might be more.

Some of the poems have appeared at Mezzo Cammin and qarrtsiluni (January 24), and some are forthcoming at The Flea, but I haven't sent many out yet. They are still new. So it will be a while before The Book of the Red King appears in the world.

But in the meantime, you can always slide down to the next post and take a gander at The Throne of Psyche. That book of poetry will be out soon.

And maybe it's appropriate here to remember once again (trala!) the immortal words of Kenneth Rexroth: "People who say they love poetry and never buy any are cheap sons-of-bitches!" Long ago, back in the mythical time of youth, that line was typed on a little strip of paper on end of the poetry section at the Bull's Head Bookshop at The University of North Carolina at Chapel Hill. It must have been effective because it stayed up for years! XD
Posted by Marly Youmans at 3:00 PM

Email ThisBlogThis!Share to TwitterShare to FacebookShare to Pinterest
Labels: "The Flea", Mezzo Cammin, qarrtsiluni, The Book of the Red King, The Throne of Psyche