The Witch and Clive on Christmas Eve


If you would like to see the poem I wrote for Clive Hicks-Jenkins while taking a break from adorning the Christmas tree, fly here to his Artlog. "The Witch of the Black Forest" appears in honor of his marvelous, just-out Hansel and Gretel (Random Spectacular), which I expect that you will wish to buy during the 12 Days of Christmas. The poem was written for a contest to accompany the appearance of the book (with the prize of a Toy Town Theatre), and it's not the first time Clive has impelled me to write a poem.

And it's wonderfully scary, that book, and perfect for a launch date in Advent, when good Christians are to consider The Four Last Things: death, hell, judgment, and heaven! But good viewing and good reading all year long.... Here you can see some images and the great little book trailer.


Merry Christmas!
And thank you to Clive....


Mary stood in the kitchen
Baking a loaf of bread.
An angel flew in the window
‘We’ve a job for you,’ he said.

‘God in his big gold heaven
Sitting in his big blue chair,
Wanted a mother for his little son.
Suddenly saw you there.’

from Charles Causley, "Ballad of the Breadman"

from Richard Wilbur, "A Christmas Hymn"
Posted by Marly Youmans at 9:56 AM 10 comments:

Q & A with a younger writer 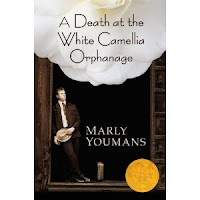 Here's a portion of a  slightly altered (to disguise the innocent) Q and A from private messaging on Facebook, dealing with issues of revision and Beta readers and workshops.

The accompanying images are covers / jackets of my books now in print, in lieu of doing a boring post about what's in print. (And The Foliate Head is somewhat in print--that is, copies still remain at online outlets.)

Q:  By the way, I have a question: do you use beta readers or critique partners? I am confused. I have revised a story a bunch of times, trying different directions. Got it back from my fiction teacher this week and he liked it, believed everything, and had one small fix that I agree with. Then two days later my writing group met and all three women had many more criticisms than he did. They believe a lot less of the story. I am curious to know if you just trust yourself and your editor at this point or if you have trusted readers.

This gets my head spinning sometimes. I cut something out to get at a different truth, then I find out that someone liked the part I cut out. I put it back in, someone finds it distracting. And round and round it goes.

A: Once, long ago, I did an event with a certain famous writer, and he referred to his six Beta readers, and how he expected them to drop what they were doing, read, and get back to him immediately. And I had to admit that I was the sort of person who didn't like to bother anybody, and that I almost never asked anyone to read a manuscript. Once in a blue moon somebody (in the faraway Carolina past, that blue moon reader would be Erica Eisdorfer) reads something unpublished, but in general I just don't do that. And, really, in the history of the world, most writers have not had that luxury. Even when they read a new poem or story to a group of friends, what happened would not be what we now call "workshopping." Also, I think there's a danger in Beta readers. Writing by committee is not a good idea.

You know, it's not a requirement for a book to be without flaw in order to be a great book. Moby Dick has loads (whale-barrows) of flaws, but it's unquestionably a masterpiece. A book has to try to capture life as best it can, and if it does, well, flaws don't signify so much.

However, I just read The Fellowship, the Zaleski book about the Inklings and was rather jealous of them, though. Their method was not very workshop-like, I note. No brooding over the words and giving careful feedback. They sat around, drinking and smoking, and would read new sections / stories / poems aloud. The reader would get a reaction and comments, but it was more of a casual, oral-response-only sort of thing. Gut reactions. And sometimes the comments were harsh and not helpful (Dyson on Tolkien!) but the impression is usually of support and encouragement (which writers tend to need but don't always find.) Being with other people intent on the same thing is genuinely helpful. You don't feel so alone. (I mostly hang out with painters, which is not exactly the same but helpful.)
Posted by Marly Youmans at 5:17 PM 8 comments: 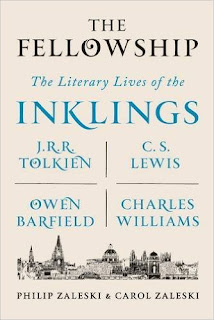 I have just finished the Zaleski book, The Fellowship: The Literary Lives of the Inklings, and find that I have a feeling of intense nostalgia for something I never had and never could have: the camaraderie of young men together, with no women about, talking about art and philosophy and aspirations; the ability to go off on great, indulgent walking trips without the least notice to family as to what I am about; the ignoring of laundry and such in favor of pub and talk and good beer whenever I like; and the hearty support and encouragement and combativeness and rousing animal spirits of a set of companions wild to make stories and poems and write books of all sorts.

How marvelous to live in a small country and meet and spend a lifetime with like-minded people so that you know them intimately and care about them and their accomplishments. Living in a snowy, remote village, I don't have companions who are writers, though I have lunch frequently with two serious painters in order to get my fix of the idea that there are still people in the world who are dead serious (although with a sense of humor) about making things of beauty and rejoice in that work. And, of course, I have my e-acquaintances, many of whom write or are enthusiastic readers.

Still, I feel that strange nostalgia.... But now I go off to fold some laundry and maybe do a little revision before I go to sleep.
Posted by Marly Youmans at 11:55 PM 9 comments: