The Book of the Red King is on John Wilson's booklist at First Things. Hurrah! There's a good bit of poetry on the list, including new books by Jennifer Reeser (a poet I met long ago at the Westchester poetry conference), Aaron Belz, the late Brett Foster, Diane Glancy, Laurance Wieder, and Jane Tyson Clement, who died in 2000. And more in other genres...
Posted by Marly Youmans at 12:44 AM 8 comments:

Email ThisBlogThis!Share to TwitterShare to FacebookShare to Pinterest
Labels: First Things, John Wilson, The Book of the Red King

The Fool frolics at E-Verse Radio 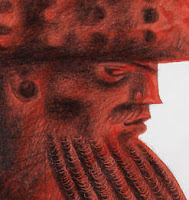 "Definition of Fool"
from The Book of the Red King
at E-Verse Radio
*
Art by
Clive Hicks-Jenkins
Posted by Marly Youmans at 6:58 AM No comments:

Email ThisBlogThis!Share to TwitterShare to FacebookShare to Pinterest
Labels: Clive Hicks-Jenkins, The Book of the Red King

Please drop by the page for The Book of the Red King, now with additional new and enticing comments from novelist Scott G. F. Bailey, poet Ray Oliver, much-laureled poet and novelist Fred Chappell, poet Sally Thomas, poet Jeffery Beam, and poet and novelist Sebastian Doubinsky. The last of these posted a review on my birthday yesterday: lovely gift!

At right: a precious wentletrap by Clive Hicks-Jenkins... The Fool's beloved is the lunar lady, Precious Wentletrap.
Posted by Marly Youmans at 8:42 PM 10 comments:

Jeffery Beam is back up at Lady Word of Mouth with Spectral Pegasus / Dark Movements! Based on art by Clive Hicks-Jenkins...
Posted by Marly Youmans at 12:27 PM No comments:

These poems work pretty well as a sort of group...

A poem up today at First Things: "An Icon of St. Margaret." And it is in good company with poems by Sally Thomas (fellow Carolina poet with a book forthcoming from Able Muse), Daniel Rattelle (grad student in writing at St. Andrews), poet and scholar James Matthew Wilson, and more.

"The Secret from the Ground" in North American Anglican.

"Both Sides of the River" in Young Ravens Literary Review: A Biannual Online Literary Journal. The centering is the 'zine's choice.
Posted by Marly Youmans at 9:00 PM 11 comments:

The Book of the Red King as Board Game?


A month back, writer Fred Chappell wrote me a long, curious letter about The Book of the Red King, and he suggested a way of looking at the book that I found interesting and enlightening. He talked about puns, sound play, musical language, and many other things, but it's his thoughts about board game and the book that I'm sharing here. I'll back up slightly so I don't miss what he says about the illuminatory accompaniment of Clive Hicks-Jenkins. Such lovely work deserves its accolades!

...the production is handsome, elegant and surprising. Mr. Hicks-Jenkins has done a grand job; his images and designs are in classy harmony with the spirit of the poems--as best as I can read them, anyhow.

I am content that he and [writer] Kelly [Cherry] have made better readings than I. She notes "a difficult and dangerous journey." I was not able to follow the progress of a journey--except through or over time, maybe. I read the volume as a nonsequential sequence and after some fanciful meditation thought of it as a sort of mystical, metaphysical board game with icon pieces: King, Fool, ideal Wentletrap, Alchemist, Flowers, Castle, Garden, and etc. as occasion required or suggested.

The game would be a little like chess and backgammon combined. Each poem is set in a new situation, the positioning of the pieces, their relationship to one another, determined by some shift of inner or outer circumstance. Each new situation requires on the part of Fool or King, a different new mode of perception--rather in the way that any movement of a piece on a chessboard generates and is contained by a new configuration of possible future moves. The Mere Fool sees things differently than does the Twelfth-night Fool; the Mere Fool is in quest of enlightenment; the Twelfth-night Fool experiences an epiphany which is not the result of his quest but which would be unavailable to him without that experience. The King of "Raptures" is very different indeed from the figure in "The Turret Stairs." And of course there are a number of poems in which both King and Fool appear and their perceptions / conceptions of the world are contrasted, though even in these the contrasts are not complete; often, in slant ways, they are complementary. King and Fool undertake very different ways of looking at the world and come (if they do) to very different conclusions, but these are not mutually exclusive--different but complementary, a little like logic and mathematics, perhaps. Although neither of them would be confused with a logician.

Nor will I, if you have been trying to comprehend this letter.

I have from line to line enjoyed and admired it unflaggingly. For it is as if I traversed a long gallery of separate dramatic moments: stately, antic, thoughtful, gay, gravid, artful, decorative, spontaneous, ritualized, reverent, satiric, learned and almost always to some degree playful. At times I thought, This book is the product of a metaphysician writing a series of comedy sketches. At other times, This is what happens when Pierrot philosophizes as a culture critic.

When I say "decorative" I mean no disrespect. For me Wallace Stevens is a decorative poet but supremely serious also and I might say the same of the paintings of Paul Klee. A lightsome approach can be most revealing--when it is rendered by a deft and practiced hand.

...maybe you can gather some estimate of my admiration and towering respect. This many-colored Paean to Imagination is unmatchable.

I didn't need to put in a bit from the close, but I just love it, naturally enough!

Though I'm not sure where the Red King and the Fool came from, I have to admit that I was deeply influenced as a child by the Alice books. (Two slip-cased volumes were given to me in Louisiana when I was four. The Louisiana of my memory fits neatly with Wonderland.) And they certainly unite a board game and a Red King, and they introduce us to strange gardens, odd courtly figures, puns, and musical language. So Carroll and his strangeness may well (so to speak) be at the very bottom of the book, somehow, and at the bottom of my being. And surely an Alice-child is a sort of Fool, entering another world and trying to decipher it, directed by insufficient knowledge that yet grows as she goes. As a little girl who was made to move every few years all through childhood, I probably had some special affinity with the sensation of tumbling into another world and needing to navigate, and feeling quite, quite foolish.

Thinking about some of my fiction, I remember that I wrote a story about a Red King sleeping... And one of my early stories ends with a child in Collins, Georgia, reaching out her hand to a pier glass, still trusting that the mirror might dissolve under her touch. So: I am clearly guilty of Carroll influence!

As for Fred Chappell's view of a constant new positioning on a kind of metaphysical board, I have no trouble finding that view to be helpful: I always thought of the Red King as a being who was unpinned in meaning. I thought of the Fool as someone who is changing, changing--the book is punctuated by and structured to some degree by the alchemical colors that mark his transformation. And yes, I always felt that the book would be playful, sometimes even when it dealt with terrible things--and surely that links up with the board game idea, the metaphysician comedy, the Pierrot philosophy, and lightsome decoration.

While I can't say that I was pondering board games during the writing, on this very evening I have a date with my three children to play Arkham Horror, a board game set in H.P Lovecraft's Cthulhu Mythos. The game has been spread down the length of the dining room table since the last Monday night, when we four (Michael being in India) left our heroes and heroines in a highly dangerous situation. Will we survive? Will we defeat the Ancient Ones? I, you may wish to know, am a man with a long and admirable beard, a seeker who gathers clues and a mystic who wards against evil. Wish me luck in helping to save the world, and be sure and consult The Book of the Red King for a metaphysician's comedy or a Pierrot's philosophy!

November 5th postscript for the curious and lovers of board games: It was a hard struggle, but the Ancient Ones destroyed the world last night.
Posted by Marly Youmans at 4:14 PM 5 comments: