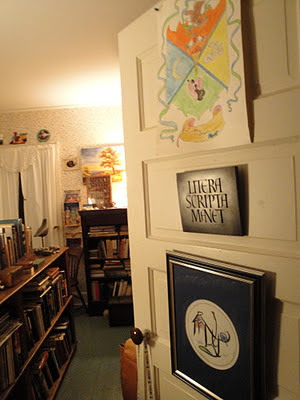 There's a long new Charis in the World of Wonders interview, one with lots of pictures that Chris Rice Cooper has put together. Some are things she requested, some are things she quarried online. She asked lots of questions, and there's an excerpt as well.  If you're a nosey sort (who isn't curious?), you might like to take a look around, as there are glimpses of my bedroom, kitchen, dining room, writing room, etc. Hop here: http://chrisricecooper.blogspot.com/2020/04/marly-youmans-charis-in-world-of.html.

Here's a piece by Brynna Carpenter-Nardone at the Cathedral of All Saints in Albany, New York... It's about my poetry, mostly, but I expect all visibility helps at the moment... The piece is on the cathedral blog and goes out to subscribers as well. Today was supposed to be The Hidden Cathedral Poetry Conference (Cathedral Arts series from The Cathedral of All Saints, Albany, New York, and I was to be keynote speaker), but it has been postponed a  year: https://cathedralofallsaints.org/cathedral-arts

I've turned my blog post, "Books for young boys who read at a high level," into a list at Bookshop.org. Some books were not available at the site and are missing, but I've added new ones as well. And I've made several other lists--one of my in-print books (missing The Book of the Red King, alas), one of some (maybe more when I feel energetic!) favorite rereads, and one of books by friends and acquaintances. These are but works in progress, and may grow. Bookshop does not have every book I think to add, but I expect it, too, will be growing.

"Q and A with Marly Youmans, Author of Charis In The World Of Wonders" - interview at Women Writer, Women's Books  11 April 2020

Excerpt (the first appearance of Hortus) from Charis in the World of Wonders at Women Writers, Women's Books  3 April 2020

* "Mystic Journey," "Jane Eyre in the Red Room," "The Plum Oak Pot," and "The Hand" (audio and text) at Pete Candler's pandemic project, A New Decameron. The first and last poems are blank verse; the other two are part of a sequence of poems influenced by Hebrew parallelism and Yoruban praise traditions: art has always been a Silk Road. Thanks to Pete for a request.

* "Plague-spell" and "Death of a Singer" at The Living Church (Episcopal/Anglican Communion) 19 April 2020 issue. Thanks to editor Fr. Mark Michael for his request. I'm afraid you have to have access to a print issue on this one.

* "The Homunculus" from The Book of the Red King (video) at The Ballsians on youtube: here.
Posted by Marly Youmans at 8:32 AM 2 comments:

Email ThisBlogThis!Share to TwitterShare to FacebookShare to Pinterest
Labels: Cathedral Arts, Charis in the World of Wonders, Interview, poetry, poetry videos, The Book of the Red King

Charis in the World of Wonders
and poems: updatery!

Anak Krakatoa erupted on Good Friday, locusts afflict Africa, the pandemic rages everywhere, Etobicoke Creek ran as red as blood: maybe you had better get started on your quarantine reading of Charis in the World of Wonders...

"Q and A with Marly Youmans, Author of Charis In The World Of Wonders" - interview at Women Writer, Women's Books  11 April 2020

Excerpt (the first appearance of Hortus) from Charis in the World of Wonders at Women Writers, Women's Books  3 April 2020

"Mystic Journey," "Jane Eyre in the Red Room," "The Plum Oak Pot," and "The Hand" (audio and text) at Pete Candler's pandemic project, A New Decameron. The first and last poems are blank verse; the other two are part of a sequence of poems influenced by Hebrew parallelism and Yoruban praise traditions: art has always been a Silk Road. Thanks to Pete for a request.

"Plague-spell" and "Death of a Singer" at The Living Church (Episcopal/Anglican Communion) 19 April 2020 issue. Thanks to editor Fr. Mark Michael for his request.

"The Homunculus" from The Book of the Red King (video)
at The Ballsians on youtube.
Update: It is up! Go here.

Poetry videos and text from The Book of the Red King
at the Cathedral Arts blog from Albany, New York

Email ThisBlogThis!Share to TwitterShare to FacebookShare to Pinterest
Labels: Charis in the World of Wonders, Holy Week, pandemic, The Book of the Red King

Palm Sunday in The Long Lent 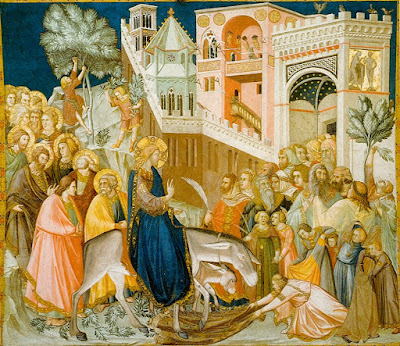 Pietro Lorenzetti, Entry of Christ into Jerusalem, 1320. Painted 27 years before the peak intensity of the Black Death began. 700 years after Lorenzetti painted this image, it is Palm Sunday in The Long Lent. The very Long Lent. Public domain image, Wikipedia.


Marly-words
(or, what I've been working on lately)

The Lorenzetti is pilfered from my own facebook site. I'm finding it hard to keep up with current requests for writings, videos (yes, I have finally made some videos of poems from The Book of the Red King, and will make a Charis excerpt as well), and poems--people are finding more time to make extended projects and to ask for contributions, I imagine. Lots of requests for poems, and even a commission to write a pandemic poem, a thing I had promised myself not to make because I disliked so many 9-11 poems. However, dear reader, I did it because I am fond on the editor who asked. Aiee! There's a notable increase in requests from Christian venues, and I find that curious and interesting. Meanwhile, I've been keeping up with a couple of my social media sites better than the blog--mainly because that's where the most interaction with readers happens, these days--and am pleased by some good attentions to Charis in the World of Wonders. In addition, I'm doing some radio interviews for the book launch, something I've never done before, and hoping not to appear as a doofus on the airwaves!

https://www.anewdecameron.com/
Paul Candler's pandemic project--
lovely to be on the home page,
and so far four of my poems are up.
Forthcoming--a long poem
and the opening of Charis.

Charis in the World of Wonders excerpt at
http://booksbywomen.org/charis-in-the-world-of-wonders-excerpt/

Clive Hicks-Jenkins on The Art of the Cover,
with a good bit about our collaborations
https://clivehicksjenkins.wordpress.com/2020/01/18/the-art-of-the-cover/


The Word, and a Virtual Palm Sunday

Want to go to Palm Sunday services with me
in The Village of Cooperstown?
Christ Church Cooperstown
Easy to stay six feet apart...
Feel free to wear your pajamas!

And if you're bookish, which I assume you are (having landed here), you might like to know that novelist James Fenimore Cooper was warden of this church, and that it has had a remarkable number of writers as members--William Wilberforce Lord (the famous poet that Wordsworth praised but Poe derided, and with much vigor), Susan Fenimore Cooper (read Rural Hours! surely influenced Thoreau), Paul Fenimore Cooper, Fae Malania, Ralph Birdsall, and many more...There's also a memorial niche to Constance Fenimore Cooper, friend of Henry James and writer who has been getting a lot of attention lately. James Fenimore Cooper was the one responsible for turning a little village church into a Gothic bandbox after he returned home from Europe.