Larking at the Clark

Michael and I had a glorious 30th anniversary celebration over the weekend in Williamstown, MA. Two days at the ever-fabulous Clark Art Institute, feasting at Coyote Flaco etc., lots of walks around Williamstown. (If you go and are of a literary bent, St. John's has a splendid Bunyan "Pilgrim's Progress" window, and there are fabulous John Martin mezzotints of "Paradise Lost" hidden away in a little gallery in the Clark cellar.) Special exhibits on Alma-Tadema, Picasso, and Frankenthaler are on at the moment. Bemused by several pieces that suggested how much Sendak learned from Picasso.... The collection is splendid, with wonderful works by Ghirlandaio, the Master of the Embroidered Foliage, Pesellino, Gainsborough, Homer, Inness, Singer Sargent, and many more.

I discovered that a person cannot get away from Cooperstown in Williamstown, and not only because Sterling Clark was brother to Stephen Clark, who founded so much in Cooperstown with their father's share of the Singer fortune. Saw a stone-and-bronze monument to Ulysses Grant (Negro Leagues star) that mentioned The Baseball Hall of Fame, and three paintings by local painter Tracy Helgeson were hanging in the front window of Greylock Gallery.

That was my third and longest visit to the Clark. If you have not been, it is well worth the trip. And there are now trails and a big reflecting pool and new galleries and study areas. I came home with books about the Clark collection, Dürer, and Owen Jones's The Grammar of Ornament.
Posted by Marly Youmans at 12:23 PM 6 comments: 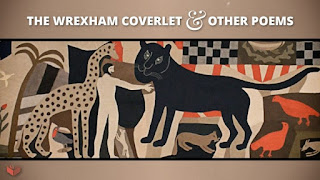 Big thanks to Chris Phillips for featuring "The Wrexham Coverlet" and "At the Fall in Borderlands" (published in the current issue of John Wilson's new Education and Culture) on his podcast, Word from Porter Street (#4 new series.) I'm at 2:45, but listen to the whole thing; it's a quick 15 minutes. Jump just HERE.
Posted by Marly Youmans at 10:59 PM 2 comments:

The start of the 11th chapter of Maze of Blood...

The girl broke into his house like a wave.
Windows were thrown open to let the breeze in, and the crickets sawed like mad on their dry, chitinous fiddles. Somewhere in the background a radio played a cowboy song about horse thieves and a broken heart. Conall had been rattling the Underwood’s keys and ranting a story to the air when she sailed through the door and splashed against the walls.
His mother and father tried to turn her away, as if pushing with their dried, withered fingers against the blue-and-green swell of a mermaid. But her voice rang out so loudly that she woke him from a tale of bushwhacking across the wilderness, and he came into the living room.
Her brown eyes held his.
He could feel the walls starting to buckle—could feel some kind of radiance pouring out of her and pushing at the meager room, making the dilapidated couch and chairs stand out in all their cheerlessness. Perfume blossomed in the air that had been stale and smelled faintly of illness. Her presence diminished his mother and father, and they dwindled to toys. She might as well have been a tiger roaming the Sikhote-Alin mountains, and they two little rabbits in the ginseng leaves! Her body moved easily, as if she were more at home in the house than they, with more of a right to be there. Conall felt a ripple of pleasure—or gratefulness—perhaps even joy. Whatever it was, the sensation was so unfamiliar that he could not put a final name to it and knew only that for all his bulk, he felt very light on feet that seemed about to float up from the floor. He wanted to rush to her, wrap his arms around her, and sniff the scent of her hair, and he would have been content to hold her that way for a long time.
“You reminded me of a poem,” he told her, later on in the evening.
“What poem?”
“‘Kubla Khan.’ The way the water goes dancing and diving.”
“Next time I’ll bring my dulcimer,” she said..
“My Abyssinian maid,” he said, and smiled.
“The Abyssinian maid melted away like the poem.”
“I’ll have to hold on tight,” he said.
She dazzled him. A kind of bewitchment was shed from her fingertips as she spoke. In the distance, crickets were chirping, and a few spotted chorus frogs were throat-singing—their vocal sacs emitting a series of rasping trills. Conall said that the frogs had been Mongolians in another life but had been sent to Texas to repent of their sins. He told her that he had called up the moon especially for her and that the harvest moon belonged to Ceres. Soon, he said, the daughter of the goddess would be leaving for the winter kingdom of Hades. He wondered how Persephone, so full of light and life, could endure such a kingdom of darkness.
Clinging close to the horizon, the enormous autumn moon had taken on the surprising color of a rutabaga. Perhaps they had danced under the moon together. Conall didn’t know how to dance but couldn’t imagine that ignorance would have stopped him. He could not remember, though he could still feel her hand that was small and warm and sweet-smelling. Perhaps the dancing had come later in his dreams.
Her name was Maybelline.

Note: hardcovers of Maze of Blood and Glimmerglass are currently on half-price sale at Amazon. 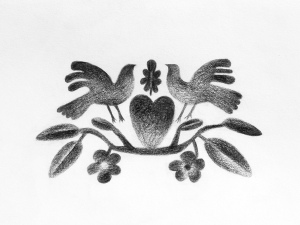 Email ThisBlogThis!Share to TwitterShare to FacebookShare to Pinterest
Labels: Maze of Blood

excerpt mid-way in Chapter 10, A Death at the White Camellia Orphanage. Pip runs away again, and this time he thinks to take Clemmie and her baby.

Stillness had come over the world; the train had been checked in its flight and was taking on water.
“Come with me,” Pip whispered, the idea so new and bright and large in his mind that he never thought to hold back the words, any more than he could think to keep the orb of sun from cresting the horizon at dawn.  He had grown another inch in the past month.  He bent down and kissed her on the mouth, and under his hand he felt a flutter at her throat.
Clemmie laughed and then kissed back, pressing against him until the baby squalled and she drew away.
“Come with me.”  The words seemed potent and magical, like what he had imagined back in the Emanuel Primitive Baptist Church as Preacher Bell described the peal at the world’s end when souls would be threshed from their husks.  Would it be so different from the two long whistles that meant the brakes had been released and the train was moving?
The locomotive released a head of steam; a black thunderhead sprang from the chimney.  And at once Pip understood that this was what he had been meaning for years:  Come with me.  Had he known all along that the three of them would be standing by the train, that he would draw Clemmie by the sheer force of his own wish, and that they would swarm, laughing, into the shadows of an empty boxcar?  They would be a family, flying across the flatlands, feeling the earth swell under their heels and break from the plains in mountain surges.   It was not anything to do with Bill; it was about him.  In the light of his rapture of need, her earlier bonds looked wrong and weak, would crumble to dust and drift across abandoned farms like ghosts exposed to the dawn.
He could see the double-headed engines now, black boulders crowning a rockslide barely held to the groove of track as it eased to round the curve—then the train was upon him, the rumble quickening and the whistle crying the crossing signal of two long notes, a short, and another long that seemed to pluck at his skin, alerting every inch of his body.  The lead engine shot past, the engineer and fireman towering above him, sparks from the wheels zinging onto his pant-legs like beetles of fire, but he did not stop staring at Clemmie, who was laughing again but not shaking her head.  For once in his life, he was locked onto a woman’s eyes, her pupils widening to take him in.  He grabbed her hand and began to race alongside the train, the baby shrieking in bursts like a small steam whistle.  When he leaped for the boxcar, Pip made it easily, but their hands uncoupled, and he shouted at Clemmie to hurry.
She did start after him, lifting Lanie as if she would throw the child into his arms.
Posted by Marly Youmans at 6:00 AM 6 comments: