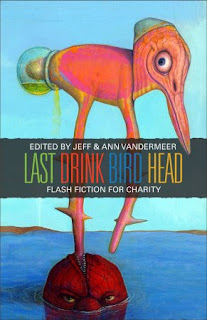 A DESCRIPTION PILLAGED FROM JEFF VANDERMEER

What Is Last Drink Bird Head? That’s the catalyst editors Ann and Jeff VanderMeer provided to over 80 writers in creating this unique anthology, with all proceeds going to ProLiteracy.org. All each writer got was an email with "Last Drink Bird Head" in the subject line and the directions "Who or what is Last Drink Bird Head? Under 500 words." The result? Last Drink Bird Head is a blues musician, a performance artist, a type of alcohol, a town in Texas, and even a song sung by Girl Scouts in Antarctica. Famed designer John Coulthart did the interior, which features bobbing bird heads in the corners of the pages, so that the antho is also a flipbook. Scott Eagle provided the distinctive cover art, and Jacob McMurray of Payseur & Schmidt contributed the cover design for the dustjacket.

In this small story, titled "The Four Directions," Last Drink Bird Head is not a person or creature but words on a scrap of paper shoved in a man's hand. Just to keep up with the disorienting surrealism of the book, I'll give you an excerpt--a scrap, if you will--from the middle of the 5-part story:

The numberless sands went on.

Those old men had branded me infidel and sent me into the desert. My sweetheart, my mother, and my father had been slaughtered. Yet I trudged on and could not die.

In a good hour I came on the oasis of a shop, sign creaking: a solitary shoe, with LAST carved underneath.

The bandylegged owner laughed when he caught me drinking from a basin on the floor. He brought me a brimming pitcher, and I drank while he washed my feet.

Afterward, the last-maker measured them with his hands—the girth of the ball against the girth between thumb and middle finger, the instep between thumb and little finger. Søren whittled two precious spars of wood into lasts, shaping ‘feather edge’ and toe and heel.

Each day, he flung the shavings into the air, and they sailed away like feathers.

Once at daybreak, Søren gave me the pitcher and sent me to the spring. As always, I drank its bright sweetness and bathed in the pool until the sea sang in my ears.

I slept, cradled by water, and when I woke, saw an angel cutting diagonally away from the fountain. The battered cup was still trembling on its chain.

Ministry of Whimsy, through Wyrm Publishing, has made the Last Drink Bird Head flash fiction anthology available for preorder at a $5 discount. All proceeds go to ProLiteracy, an organization that “champions the power of literacy to improve the lives of adults and their families, communities, and societies. We envision a world in which everyone can read, write, compute, and use technology to lead healthy, productive, and fulfilling lives.”


WRITERS YOU MAY KNOW WHO ARE LAST DRINK BIRD HEADS 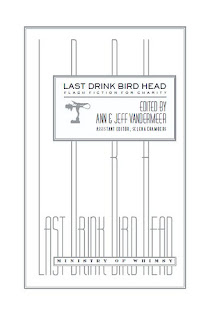 Direct link to order page:
http://wyrmpublishing.com/catalog/index.php?main_page=product_info&products_id=20
Posted by Marly Youmans at 8:58 AM 4 comments: 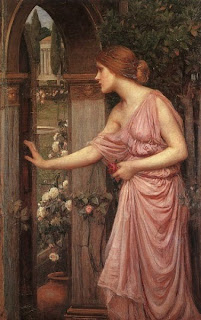 On Monday I learned that my next book--my eighth but only my second poetry book--will be The Throne of Psyche, a collection of sixty poems (Mercer University Press.) Public domain image: Psyche Opening the Door into Cupid's Garden by John William Waterhouse (1904)
Posted by Marly Youmans at 2:50 PM 19 comments: