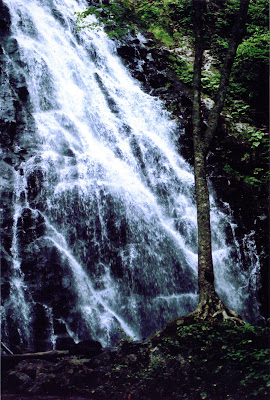 Lately I have been e-prodded and nudged and generally bothered for the crime of blog hibernation: reprove no more; here is the post! For the past nine days I have been on the road or else in Cullowhee ("the valley of the lilies") with my mother and two younger children, making forays outward to visit my eldest and to frolic in the mountains, so this will be a high-elevation post. In between two driving bouts of 888 miles, I managed to visit with a few people, haul my children to the Mountain Heritage Center, see "Coraline," take in a number of shows at the Western Carolina art gallery, and go to a concert. So that is what I'm mulling because here in Cooperstown I find that I have 700+ pages to sign and manuscript proofs to read for Val/Orson, as well as many mundane things to do. And there is not a lot to say about signing one's name 700+ times except that I am not bigheaded enough to find such an act fascinating! And it is still (still! and at this very moment) snowing in Cooperstown, just as though the crocuses and primroses and daffodils (most not quite popped, but even a green swollen stem is a welcome sight) and one anemone bud of last week in Cullowhee had been just a dream.

Artwise, my favorite things turned out to be--as usually happens when I go home to the mountains--crafts taken to a point of mastery. I especially liked a massive blackware pot by Joel Queen (one of the Bigmeat family of potters, Eastern Band of Cherokee). As his website declares, "They are tradition, true traditional Cherokee pots. They were created with hand-dug clay the same as thousands of years ago, sifted by hand, kneaded by hand, hand-coiled, stamped with hand carved wooden paddles, and fired in a traditional pit fire. They are created at the same sophisticated level of quality as the ancient Mississippian pots. They are created with a consistency of thickness, depth in the incisions, and fired at a precise temperature vitrifying the clay body, rendering the pots waterproof. These are skills learned only from a knowledge and mastery of the clay." I also admired a recent Norm Schulman vessel and a 2008 Mark Hewitt salt glaze vase donated by Joel Queen. I used to see Hewitt's work often when I lived in Chapel Hill and liked it, and his translation from Stoke-on-Trent and Spode, the traditional family business, to a role as independent art potter not far from the pottery center at Seagrove is a good Carolina pottery tale.

A woman-dominated show of jacquard and entrepreneurial textiles at Western Carolina University was interesting, though I'm afraid that "smart textiles" with electronic components woven into the fabric and "performance and interactive textiles" strike me as something of an abomination, rather like using plastic in a blooming garden. I imagine that I reacted to them in about the same way as William James on reading the complex, late Henry James: impressive, marvelously accomplished work, but why do it at all?

Some of my favorite pieces were white weavings by Pauline Verbeek-Cowart, although when I look at the description of her work at her home academic institution, I think she maligns herself and her fine achievements: "Most of her weavings span several feet in both directions and comment on the nature of woven surfaces. Through structure, material, image and/or surface treatments, she demonstrates that weaving is unique in building an image." Several feet in both directions: no doubt they got that right, although the ones I saw happened to be more than several. "Comment on the nature of woven surfaces": this is the sort of thing I dislike in arts and handicrafts commentary. The thing is itself. It is satisfying as a thing, a beautiful thing that is a special kind of experience. It does not comment. It does not write monographs. It does not need footnotes. It does not strain to understand its nature. To be so beautiful as to appear effortless is quite rare enough all on its own. "Unique in building an image": why say it? It's just academic justification for beauty, and that's not needed. Academic justification for beauty is, in fact, an offense against beauty.

I also admired the clothing of Leslie Armstrong and Anke Fox (Armstrong Fox Textiles, Canada), whose designs had lovely rich colors and weaving and draped beautifully. Most pilfer-worthy for the light-handed gallery-goer, so I hope the guard chihuahuas are out! The real thing is infinitely softer and more subtle in shade, but some pictures are here.

Last, I attended a recital by composer and percussionist Mario Gaetano, particularly Ney Rosauro's "Brasiliana" for wooden idiophones ("Eldorado" for metal idiophones being slightly less magical but also good) and Gareth Farr's "Bali," "Japan," and "South India" from "Kembung Suling." And I liked Gaetano's "Music for Two Doumbeks," played with his daughter. In fact, I liked it all, even the marimba with tape piece that now seemed so dated. Perhaps my in-house percussionist, age 11, saw some reason for that annoying activity, practice...

I had a grand time in Cullowhee and the mountains, although my heart was riven for the nth time by the utter dearth of zoning and thoughtfulness about development in western North Carolina, particularly the area around Sylva (so un-sylvan these days) but extending on to Asheville. The descendants of the so-called "Ulster Irish" (many of them northern English and Scots Protestant borderers transplanted to Ireland for "planting" in the 1600's) are still just as stubborn and independent as ever, but what they never seem to grasp is that their birthright is being sold for a mess of cold porridge. Strangers (wake up! the Yankees are here!) have come in and seized the inheritance. Natives have valued the greeny pile of dollars over the mountains that their ancestors felt were God's blue walkways to the sky. Now it's lift up thine eyes to the hills and find a dratted chain hotel or chain fast-food joint, or else lift them up and find the mountain missing entirely. To bulldoze a mountain is a crime against nature and against the future, whose children will blame those who failed to zone with hard words. It is also a stupid thing to do in a region of landslides and mudslides--one sees butchered half-mountains everywhere, held up by braces of stone and wood so that a big box store or some other pernicious piece of real estate can be erected. (Walmart, of course, removed "their" mountain quite completely, and threw up a massive store and even more massive parking lot.) Moreover, those lucky souls who live in the mountains completely lack foresight even about their money interest--destroy the glory of the mountains, and what tourist will come to spend their dratted dollars? The blight of what was the most beautiful land on the east coast of North America for the sake of human greed is an ongoing tragedy. As William James nailed it in a letter to H. G. Wells a century ago, "The moral flabbiness born of the exclusive worship of the bitch-goddess SUCCESS. That — with the squalid cash interpretation put on the word success — is our national disease."

Photograph credit: Image of Crabtree Falls, courtesy of http://www.sxc.hu/ and photographer Greg Pinkston of Oklahoma, U.S. Crabtree is a pretty waterfall, about a .25 mile walk from Crabtree Recreation Area, Blue Ridge Parkway (milepoint 339.5).
Posted by Marly Youmans at 11:47 AM 11 comments: