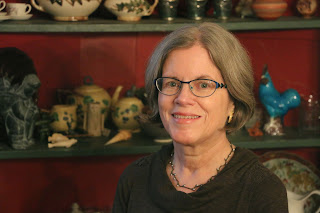 Here are some possible book jacket headshots taken by my daughter on my Thanksgiving (every seven years!) birthday last Thursday. She likes the unsmiling one best... What would you pick (given the basic materials of over-the-hill moi, of course)? It's the naked-face (bit of lipstick) and undyed-hair of me. You can see my flying eyebrow in all three. Editor John Wilson once told me that half my face was like that of the nice lady in line behind him at the post office, and the other half belonged to a poet or a murderer. Writers are murderers of a sort. But the look--that's the work of The Wayward Eyebrow. 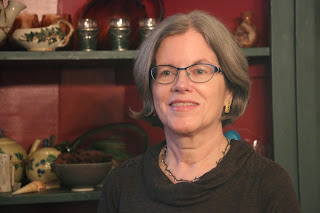 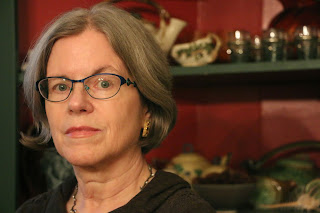 That was a big-number birthday! To celebrate, we had the full complement of five, plus the every-surprising and wonderfully dangerous-to-breakables Campbell Higle (who crocheted me a giant chicken! Chickens loom large!) A grand Michael-made feast with many festive bottles of champagne was had, followed by much stellar pie. I leaped with great abandon from my I.F.-and-keto w.o.e. (gotta love those acronyms) onto Thanksgiving carbs and sugars.

Then we went off to New York the next morning--my husband, me, and our youngest, who managed to pick up a g.i. bug and retch for much of the first night. Nooo! We felt ill but not quite as ill as he did. So we didn't accomplish quite as much as planned. Still, we tromped all over Manhattan to stare at extravagant Christmas windows; wandered St. Patrick's for the length of a service (the contrast between the cathedral and the theatrical show lights and brightly-colored shopping-ecstasy windows at Saks Fifth Avenue next door is quite something); shopped the Christmas Market at Bryant Park (we were staying near 8th and 37th, so that was convenient for persons not feeling so well); and ducked out of the rain to eat at Arva (Arva Madison Estiatorio on 60th--quite good.) And nobody tossed his cookies while out, which was a kind of victory, though I expect it happens fairly frequently in the city. (Confession: I once threw up in some tiny, extraordinarily well-groomed bushes next to a bunch of talkative missionaries on a street corner in Tokyo, but nobody even noticed.)

On Sunday, my fellas were set to see the Patriots (the youngest being a fan) beat the Jets (the unfortunate Jets!) Meanwhile I walked down to Central Park and then the Met to stare at the marvelous Armenia show--I tend to be drawn magnetically to the Medieval galleries there, so it was wonderful to see a very different Medieval world. Then I paid a bit of obeisance to the Dutch Masters show (Vermeer! Rembrandt!) and visited the angel tree in the Medieval rooms, along with some of my favorite pieces there, before walking around the park and heading back (lugging some very big books because I find it hard to leave the Met without art books.) Walked to the hotel, stopped to pick up a few Christmas presents along the way, and then gathered some more gifts and wonderful hot chili-chocolate at the Christmas Market.

Later, it was decided that a glittering night promenade across the Brooklyn Bridge enticed--that and pizza at Mr. Patsy Grimaldi's restaurant afterward. It was called Patsy's when I was there last, back in 2000 (or thereabouts) but now it is Julianna's. But Mr. Grimaldi himself showed us to our seats, and the pizzas were just as splendid as before. Our youngest was riding in an umbrella stroller the last time we crossed the bridge and hunted for Patsy's; now he is 21.

What a lovely birthday it was...
Posted by Marly Youmans at 2:47 PM 44 comments:

The Rollipoke News no. 8: Secrets and Glimmerglass Film Days


All you Rollipokers, the newsletter goes out today... with some news about a ms. of formal poems, a forthcoming poetry book, a forthcoming novel, and a film option. And an account of the frolicsome past weekend with filmmakers, film subjects, and a photographer. If you're not on the list of subscribers and would like to be, look in the right-hand column for sign-up. Or jump here.
Posted by Marly Youmans at 11:23 AM 4 comments:

Email ThisBlogThis!Share to TwitterShare to FacebookShare to Pinterest
Labels: The Rollipoke News


Read the preface (nobody does, when it's a book!)

I'm not paying the least attention to whose ideas are best in my singular, possibly eccentric mind and in this post, partly because I don't think writers have any business dictating to others, partly because I choose to trust you to have some well-formed ideas, and partly because what I am interested in here is the decline in our ability to see others as human beings worthy of respect and interesting in their own right. This is, naturally, of a matter of intimate concern to me as a novelist and poet.

Shop. Vote. Don't forget to be human.
Also: thinking like a writer.

I’ve been thinking about the loud controversies of late and the various ways we Americans have changed the meaning of our identity as human beings. An American man or woman shopping at the mall is human—that’s a given, right? A consumer is important; is human. A voter is human, but these days it is only if he or she believes the same things we do and trusts in the same proper steps to transform the country (rather than some other, surely evil steps) and so votes for “our” party. The ideal of respect (sadly, not always fulfilled over the centuries) for one another is in pronounced abeyance. That’s natural, of course, because the ideas that the image of God shines through all mortal flesh is dead in what is essentially a post-Christian society.

In the states, we are all well aware (though we often don’t give a hoot because we are grossly, madly addicted to mall-going and such) that we are interchangeable moving parts in the complicated, well-oiled machine of the economic shopping machine. In great part, we mean in this country because we shop. I shop, therefore I am. Likewise, we are tiny parts in the voting apparatus, continually pestered to think according to correct party lines. If we are too young to shop or vote or too ill or decrepit, we just don’t matter much to the system—we’re not quite human, and others decide what to do about us.

But this is wholly wrong, isn’t it? We have forgotten what it is to be human if we believe that either consuming or voting correctly grounds us and makes us human, much less fully human (another large question!) But that akilter definition of the human is the strong impression one gets from vocal campus outbursts and the standard media and the blizzard of advertising tumbling around us….

As a writer with a dislike of malls and distrust of politicians, I have a distaste for these trends and tendencies. No wonder ideals of goodness, truth, and beauty have been shunted off to a corner. No wonder many post-post-modernist practitioners of what's called (or used to be called) fine arts resist all three. And what of story in the current milieu? To believe that only one sort of thinking and action is acceptable (a thing that a thousand thousand memes tell us, though they do not agree on what sort it is) is the death of the novel. An insistence on conformity kills story. Examples of writers apologizing for their words are on the increase. Novels have been cancelled by publishers for violating correctness. Groupthink? Maybe we'll get some good satire.

To attempt to enforce a set of proper ideas—even if and when they happen to look like pretty good ideas—onto all people is simply the death of narrative. Novels and narrative poems need varied, surprising sorts of human beings to propel them, and the writer needs to respect and fully know the peculiar depths of each one of them, no matter what characters believe, how they vote, or whether they "shop till they drop" or tilt against the system with all their tiny might. A novelist needs to love a whole world of people. She needs to be large, to contain multitudes, to be myriad-minded.
Posted by Marly Youmans at 11:27 AM 14 comments: