Advance reader comments aka blurbs for Charis in the World of Wonders are in and looking great. Here's one for a teaser, from wonderful novelist Emily Barton...

“Youmans’ magnificent storyteller brings the early days of Europeans on the American continent vividly to life, in all their wonder and sorrow.”
—Emily Barton, Author of Brookland and The Book of Esther
Posted by Marly Youmans at 9:43 PM 2 comments:

Email ThisBlogThis!Share to TwitterShare to FacebookShare to Pinterest
Labels: Charis in the World of Wonders, Emily Barton, The Book of the Red King


Blurbs are in and are, well, downright fabulous... They'll be trickling out soon.
Heaps of shares on social media, but I'm still thinking I'm the Queen Ignoramus of Marketing. If you're a friend to my books, please share the news and any images you like, on blogs or facebook or twitter or whatever you prefer (unless you are a Bartleby sort, in which case, please have a cup of tea and a lie-down.) And don't forget my still-new The Book of the Red King!
Posted by Marly Youmans at 12:23 PM 2 comments:

Email ThisBlogThis!Share to TwitterShare to FacebookShare to Pinterest
Labels: Charis in the World of Wonders 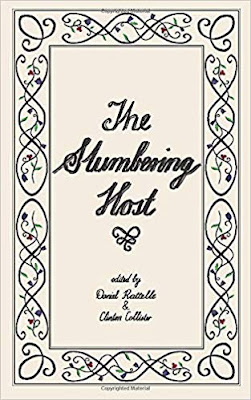 The Slumbering Host, ed. Daniel Rattelle and Clinton Collister (Little Gidding Press, 2020)
Cover art by David Baulis.
ISBN-13: 978-0578622415
A new anthology, a lovely fresh sprout from the soil of North American Anglican. I assume the title is from Tennyson's Idylls of the King. Click the link above for more comments and information and a peep inside. I'm looking forward to encountering some poets I have not read before!

"The Slumbering Host is an important part of the resistance to our late postmodern literary culture.  The poets in this anthology have rejected the poetry of brutalism spawned by Ezra Pound, and have instead embraced spirituality and traditional poetic craft. These poems collected by Clinton Collister and Daniel Rattelle display music, grace, and ambition." --A.M Juster

"The Slumbering Host remembers for us--the poems remember "what perhaps we wish the past had been," summoning voices not often heard, resonances from Ovid, Yeats, and Donne. The poets remember the tastes and sounds and colors of words, and most of all, their meanings. Unlike the obscurest rants of current headlines and rattling licentious verse of many contemporary writers, these poems and their poets do "not hasten words" but slowly beckon them to come and speak. In their poems, these words are defamiliarized and rekindled with fire. We can read these poems and know what the words mean. The poems ensembled in this collection call for us to listen to what we thought we knew and perhaps forgot, that truth is true and beauty is beautiful and goodness can be made once more." --Jessica Hooten Wilson
Posted by Marly Youmans at 8:42 PM No comments:

I'm so glad that other people (that is, people who are not me) are interested in or obsessed with genealogy. Because they turn up the most curious things. My ancestors came over early and really kicked up their military heels in the Revolution, and a lot of them are remembered--a thing I knew nothing about for many years, but eventually found it intriguing to learn about one's rambunctious patriot ancestors. Of course, as Southerners, many of my family members were Confederates later on, leading a half-Yankee little boy who loved Civil War lore to wonder why we were on the wrong side. (My eldest son, he is what led me to write The Wolf Pit.) A good many of my ancestors fought and some died in the Revolution and the Civil War, just as many in a later generation served in WWII and Korea. But what follows is my first literary piece of geneaological news, offered by a distant cousin in South Carolina, my natal state. I was born in Aiken, where South Carolina and Georgia rub up against each other.

Interesting that Faulkner came up in your post, Marly... William Cuthbert Faulkner is a distant cousin of yours and mine...
I’ll have to look it up to be more precise but our maternal 5th great grandfather, Col. Thomas Word, was the brother of Faulkner’s 3rd great grandfather, Charles Word Jr, who was killed at the Revolutionary War Battle of Kings Mountain, 7 October 1780...

I consulted my family tree and William Cuthbert Faulkner is your and my 5th cousin twice removed...

Here are a few thoughts about that tenuous connection in my maternal line.

I was obsessed with Faulkner in high school and read everything by him in the Western Carolina University library, where my mother worked. Way back then, I had a stack of Faulkner paperbacks. I kept reading him off and on in college as well. So if I had to unearth a literary cousin, that's a highly appropriate choice.

Later on, I took a seminar from the Faulkner scholar, Cleanth Brooks. All I can remember is that he made us analyze the timeline of Soldier's Pay (it is definitely a first novel and not all that tidily constructed, time-wise.) The assignment fired something in the future novelist-moi because I did a bang-up job (also known as a weird, obsessive, overly finicky-and-detailed job.) Mr. Brooks asked me if he could keep a copy, so I suppose he did.

When I think about Faulkner now, I also am led to recall my father. A poor sharecropper's child in Depression-era Georgia who ran off to war at 17 (flying missions as a tail-gunner in a B-17) and who afterward attended Emory and LSU and became a Professor of Analytical Chemistry, he disliked Faulkner's work. My father felt anguished and angered by Faulkner's portrayal of poor people, white and black, in the deep South. I've long felt that my father's own story arc is strange and often tragic, a great adventure with a brilliant protagonist who had trouble fitting in to institutions and bending to the will of others. And there were so many enticing lacunae, so many difficult passages in his life that I knew little about... Well, gaps and imaginings are why I wrote A Death at the White Camellia Orphanage. He might not have liked that one either!
Posted by Marly Youmans at 2:00 AM 9 comments:


Have a wonderful next dance around the sun!

Just made a spanking new facebook page for Charis in the World of Wonders, fit for a New Year's Day. Please drop by, and check out the facebook page for the recent collection of poems, The Book of the Red King, while you're wandering my digital lands. Art on both pages by the marvelous Clive Hicks-Jenkins of Wales.

And hey, thanks to new subscribers
of my occasional newsletter, The Rollipoke...
Posted by Marly Youmans at 10:56 AM No comments: