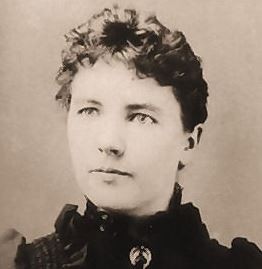 My husband's maternal grandmother and her parents were half Akwesasne Mohawk and half French Canadian. Nevertheless, Michael's North Country Gram found it in her to complain about tourists who were "so damn French they can't speak English!" It didn't slow her much. Gram was the most talkative woman I have ever known, and the most opinionated, and the quickest to complain to town officials about what she did not approve. She was the most lively person in a clan divided between the reservation and the nearby town, and I still think of her often.

Although Michael has never in any way attempted to use a thread of native ancestry for gain, he has rather enjoyed the idea that he might be related to Kateri Tekakwitha. Come winter, the Roman Catholic saint used to chop a hole in the Raquette River and plunge into the icy waters. Now that's mortifying the flesh in the morning. Now that'll startle the Jesuits!

Human beings of all stripes were tougher back then, it seems. When Mohawks chewed off the fingertips of Isaac Jogues, he sailed back to the Old World to have what was left of his fingers blessed by the pope, so that he could administer the Eucharist. Then he sailed back to the New World because he wasn't done carrying the gospel to the Iroquois. They eventually killed him, of course. Those who chewed and those who were chewed in those times seem considerably more robust and earthy than we expect. The Association of Library Service to Children would probably say that their "legacy is complex" and "not universally embraced." They might like to clean up history and de-access any book touching on those topics because history is so dratted bloody and messy and unjust, and people in various eras have opinions shaped by their own times, culture, and experience.

The latest literary flap is the removal of the name of Laura Ingalls Wilder from the Laura Ingalls Wilder Award by The Association of Library Service to Children board. You might suspect that the new name would be simply Award. But no. The new name is nice and bland: Children’s Literature Legacy Award. This is somewhat surprising because the ALSC appears to be uneasy about the legacy of the past, which is invariably complex and includes thoughts different from and often less acceptable than our own, but all right.

Putting aside any immediate hot-blooded reactions flying around the internets, what are the compelling issues rising from this action? Which are interesting tendencies or problems, whether you agree or whether you disagree with the decision? 1. We are judging the past by our present. Let's try flipping that upside down for a change and see what we learn. 2. The current times will look just as strange and wrong (perhaps even stranger and more ridiculous and wrong--who knows?) to the future as Wilder (i.e. the past) looked to a bunch of librarians determined to do the right thing by children. This is obvious and unavoidable, alas. 3. Jettisoning history and knowledge of how people used to see the world has been tried in the Soviet Union, China, Cambodia, and various other places. It has not proved to be a healthful idea. 4. The bestseller list has often made it extraordinarily clear to us that the "universally embraced" book is not very good. 5. I have noticed that recent college graduates seem to know a minuscule amount of history, including literary history. It seems that English majors can now graduate without knowledge of Shakespeare, Milton, Chaucer, and various other essential writers. Young writers wielding the English language, young writers of all colors and creeds, have a need to stand and dance and frolic on the shoulders of giants, even when they are a.) dead, b.) white, and c.) males. To say nay on this point is to undermine and harm young writers. Words beget words. Great words beget great words. Young writers will take and reject as needed--even rejection is a spur to new words. 6. The fashionable hyper-insistence on saying nothing that could possibly construed as offensive is leading to the destruction of fiction, particularly historical fiction. 7. One of the pleasures of reading older fiction is the dance between past and present. Times change. People change. The difference between times challenges us and is good for us to navigate. 8. Academia is in love with the power of jargon and the altering of names in order to change essentials. 9. A dire need to listen and learn from one another is growing increasingly more obvious. Let's do that. With civility and love for one another.
Posted by Marly Youmans at 9:53 AM 20 comments:


I am feeling downright happy about the interview with poet Susan Hankla that went up online this week. Susan and I worked hard on it, and we have received a generous response from social media to the interview, including 40+ shares or re-links of my facebook post, along with promises to buy the book and even a promise from a well-known writer to review!

If you haven't heard my bell-ringing and clamoring on this so far, please hear it now and take a look at our discussion. At the bottom of what I think of as an unusually interesting and revelatory interview, you will find some poems from the book.

Thanks to those of you who take a peek. I've wished for Susan to have a full-length book for a very long time and am pleased to support and recommend her poetry collection, Clinch River, available from Groundhog Poetry Press via SPD, or Small Press Distribution.

Introduction to the interview with some facts about Susan Hankla:

My review of Susan Hankla’s Clinch River in the October 2017 issue of The Hollins Critic begins like this: “I doubt that any other reviewer of Susan Hankla’s first full-length book, Clinch River, has had the great good luck of seeing her, a young woman, dance playfully with an enormous rattlesnake skin. Such is my sparkling luck.” I have known Susan Hankla for decades; she is one of those attractive, special people who spill over with an abundance of life, and it is a great pleasure to question her about her first full-length poetry collection, its poems bound tightly to her growing-up years and to a coal-mining region in the Appalachian South. As I wrote in the close of my review, the poems “tangle coming-of-age stories with hard times in coal country. They juxtapose the girl who cannot leave, clinched by poverty’s snares, with the girl who goes away and can return for the treasure, the gold that lies buried in her childhood: these poems, these golden apples. Take them!”

Clinch River comes to the world from poet R. H. W. Dillard’s Groundhog Poetry Press, a new small press in Roanoke, Virginia. Richard Dillard serves as publisher, editor, designer, compositor warehouse manager, and shipping director for the new poetry press, which is already shipping out its second “suite” of handsomely-designed paperback books. Distribution is through SPD, which already lists Hankla’s book as “recommended” and a poetry bestseller. Having made “not a snobbish decision but a purely practical one,” Richard Dillard is accepting Groundhog poets by invitation only. A well-known and much-admired writer and professor in the undergraduate and M.F.A.program at Hollins, he has no trouble filling his roster of poets.

A Hollins graduate with an M.F.A. from Brown, Susan Hankla previously published a chapbook with Burning Deck Press of Providence. She has appeared in Gargoyle, Beloit Fiction Journal, Michigan Quarterly Review, Blue Mesa, Artemis, Hollins Critic, Open Places, Southern Poetry Review, Poetry Northwest and New Virginia Review. A resident of Richmond, Virginia, she has received a Virginia Commission grant in fiction and fellowships to the Virginia Center for Creative Arts and the Frost Place.

Now read the interview and poems!
Thank you to editor Jean Holzinger....
Posted by Marly Youmans at 1:47 AM 6 comments:


Just home from Europe early this morning after two full days of being bumped from flights, flight cancellations, delays, and missed connections. I had a wonderful time in Prague, Vienna, Salzburg, and Munich before that, and I will catch up on all things bloggian some time in the next week, after I stop being exhausted and get over the bug I acquired at the close. Friends and passers-by, hope the last few weeks have been sweet to you! Happy to have been away, happy to be home.