Charis in the World of Wonders 2020

* * *
Praise for
Charis in the World of Wonders

“Charis in the World of Wonders confirms once more Marly Youmans' place among the magi. There is indeed ‘a dark and amazing intricacy in the ways of Providence’, as this spellbinding novel attests.”
—John Wilson, Contributing Editor, Englewood Review of Books

“Charis is a prismatic grace journey that awakens our dulled senses and ignites our adventurous hearts. A seventeenth-century girl pilgrim, with dark shadows of Salem foreboding over her, begins a refractive journey as a faithful exile toward a golden sea.”
—Makoto Fujimura, Artist; Author of Culture Care and Silence and Beauty

“Imagine if William Faulkner had decided to rewrite Last of the Mohicans. What you would have is something like Charis in the World of Wonders—a wild adventure tale written with grace and insight.  Youmans' prose is fluid, sharply witty, and deeply rich in symbolism—the work of a master.”
—J. Augustine Wetta, OSB, Author of The Eighth Arrow and Humility Rules

“Youmans’ magnificent storyteller brings the early days of Europeans on the American continent vividly to life, in all their wonder and sorrow.”
—Emily Barton, Author of Brookland and The Book of Esther

“From the pen of an award-winning novelist and poet comes the story of Charis, a girl who loses everything and finds love and acceptance in an age of fear and uncertainty. This book is that rare thing, a novel containing characters who are both historically accurate and completely relatable.”
—Fiorella De Maria, Author of A Most Dangerous Innocence and The Sleeping Witness

A writer I greatly admire and have sometimes written about, Marly Youmans, has a new book coming late in March from Ignatius Press: Charis in the World of Wonders, with cover art and illustrations by the incomparable Clive Hicks-Jenkins. This novel, set in the Massachusetts Bay Colony, should occasion a piece that tackles the whole sweep of Youmans’s work. She’s not part of any fashionable faction, and much as I would be delighted and surprised to see it receive generous attention in the New York Times Book Review and other such outlets, I am mainly hoping that First Things, Commonweal, Image, and other kindred publications will not let this opportunity pass.
—John Wilson, "Desiderata," First Things 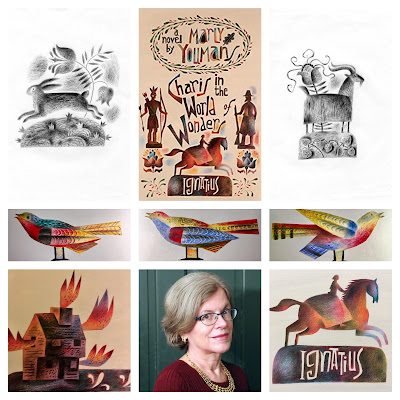 * * *
Praise:
from writers and artists on social media 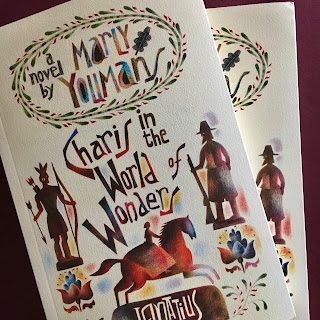 James Artimus Owen, writer and artist: This book, written by my dear friend Marly and illuminated by one of my great inspirations, my friend Clive, is a great example of What Truly Matters in the world. What keeps me going in a world of seemingly ever increasing darkness? Shining lights. Just like this.

Makoto Fujimura, nihongan painter, cultural catalyst, writer: Ok. Cannot help to tweet. “Charis”, Marly’s next novel coming out, is one of the most beautifully wrought writings of the “burning bushes” all about us that I’ve encountered in recent times.  Absolutely mesmerizing novel. #kintsuginovel #culturecare

John Wilson, editor: Every writer is in a sense sui generis, but some to a greater degree than others--@marlyyoumans, for instance.

Makoto Fujimura: What a stunning, beautiful story Charis is. I can’t stop thinking of it. Hortus continues to roam in my mind, bringing all of us to freedom.

Paul J. Pastor, writer: Having had an early look at this, I can't stress enough how wondrous this latest novel is from @marlyyoumans
Crisp, wild, dangerous, & good. The latest reason why Marly is fast becoming my favorite living writer.

Jane Greer, poet and editor: This new novel is unlike anything I’ve ever read—and the best novel I’ve read in ages. It’s set in Puritan New England and uses gorgeous language to tell a gentle but riveting story. I stayed up until 3:30 this morning to finish it.

Paul Candler, writer, photographer, filmmaker: Y’all @marlyyoumans is an absolute star. I mean she’s a fantastic poet and novelist but she’s also a gem of a human. Order her new novel, “Charis in the World of Wonders.” It’s what we all need. [Well, I don't deserve that shiny personal compliment, but I'm glad he likes Charis! --MY]

Charis + pandemic post from poet and novelist Amit Majmudar on twitter: congrats to my fellow novelist-poet, @marlyyoumans, on the launch of her new novel — no one gets to leave quarantine unless and until they’ve ordered it!

Shann Ray, poet and writer: ...a novel by my friend Marly Youmans that is astounding, a deep true read, and a book of abundance, grace, and stunning beauty: Charis in the World of Wonders. For a safe haven in the storm, Charis will see you through!

“When I swung over that windowsill, everything changed for me. We are meant to go in and out of doors in civilized style, but my mother bade me climb into woodsy wildness and a darkness flushed with crimson light and torches…”
Clambering into the branches of a tree, a young woman flees flaming arrows and massacre. She will need to struggle for survival: to scour the wilderness for shelter, to strive and seek for a new family and a setting where she can belong. Her unmarked way is costly, heroic, hard.
For Charis, the world outside the window of home is a maze of hazards. And even if she survives the wilds, it is no small, simple matter to discover and nest among her own kind—the godly, those called Puritans by others. She may be tugged by her desires for companionship, may even stumble into a sharp, intense love for a man, and may be made to try the strength of female heroism in ways no longer familiar to women in our century.
Streams of darkness run through the seventeenth-century villages of the Massachusetts Bay Colony. Occult fears have a way of creeping into the mind. And what young woman can be safe from the dangers of wilderness when its shadowy thickets spring up so easily in the soil of human hearts?


A note from the illuminator: 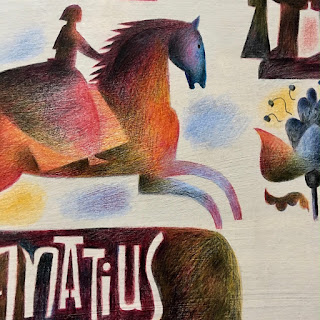 Marly Youmans' historic novel 'Charis in the World of Wonders' chronicles the journey of its protagonist on her horseback flight from destruction to sanctuary and from sanctuary to an unexpected madness that had me gnawing my knuckles as I read.

Marly is a peerless writer and at Ignatius she has an editor and team doing everything to ensure that the book's jacket and the illustrations within do justice to her illuminating narrative. Not for the first time with Marly I'm steeped in a world of early American folk art, of embroidered samplers and nature not yet crowded out by man. At its heart, Charis on her courageous Hortus, who must carry her to safety and a new life. The image here is just a tiny corner of the cover artwork. It has been, as it always is in the company of Marly, a revelatory journey.

--Clive Hicks Jenkins, pilfered from his page on facebook 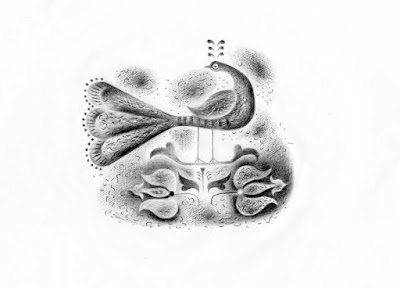 Several vignettes that suggest a little of how the interior of the book will appear--lovely folk-inspired illumination in profusion. Clearly by the hand of artist Clive Hicks-Jenkins of Wales! These images are plucked from among those he has shared on social media. 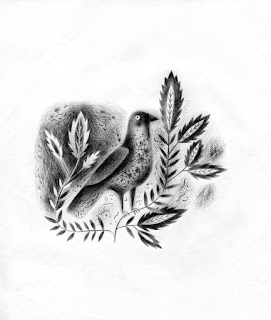 Excerpt (with the first appearance of Hortus) from Charis in the World of Wonders at Women Writers, Women's Books https://booksbywomen.org/charis-in-the-world-of-wonders-excerpt/ 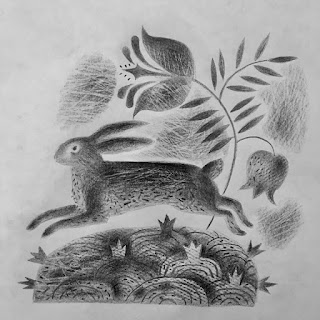 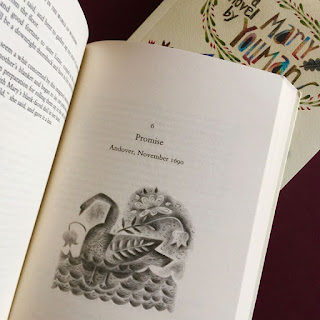