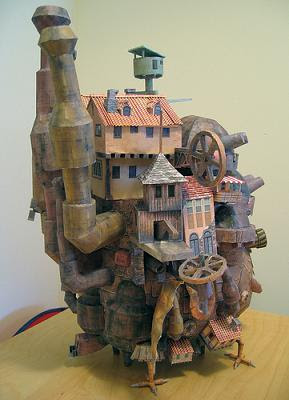 NEW POEMS ON LINE AT MEZZO CAMMIN
x
While I also have some new poems out in print mags, I have a few in the new issue of Mezzo Cammin: In All Her Gleaming Youth, She Said; Puck in Spring; Snow White in Wildwood; Stones in the Wilderness; Mirror Tree, Tree Mirror; Blurbs of the Poets, no. 1.
x
The first, second, and fifth are from my spring spate of new poems. All can be read at: http://www.mezzocammin.com/iambic.php?vol=2008&iss=1&cat=poetry&page=youmans.
x
8 DAYS OF CAKE
x
It has been a month for Diana Wynne Jones book reports. My fifth-grader, N, did a seven-layer cake book report (who dreams up these things?) about Eight Days of Luke. The cake made a cute little book by the end, although there were points when I felt that it might just kill me.
x
And now R has done a Howl's Moving Castle report mounted on poster board with much embellishment of amusing and pretty drawings in gold... I remember my childhood in school as being much more straightforward and involving pencils.
x
While she was fooling around on my computer and printing out a few photographs, I noticed this rendition of Miyazaki's version of Howl's castle. The video shows the making of the paper castle over 72 hours by Ben Millett, an attractively-obsessed (at least to other obsessed people like me) geek with cat. And most things do go better with a cat.
x
And that is a thing well known to Diana Wynne Jones.
s
Source: I saw this at http://www.pjlighthouse.com/2007/12/09/art-howls-moving-castle-papercraft-by-ben-millett/. However, Ben and Katie Millett have their own website: http://ben-kt.momillett.org/2007/07/hmc-papercraft/.
x
AND NOW, ONE PIECE OF EVIDENCE; OR, WHAT A BIG IDIOT
X
I ordered my mother's non-refundable airline ticket for baccalaureate Sunday instead of graduation Sunday. I borrowed two houses, also for the wrong weekend. All relatives have been invited for the wrong weekend.
x
The word FOOL is glowing on my forehead. Must go wash. Send news of your own foolishness...
Posted by Marly Youmans at 4:00 AM 24 comments:

News from the Nest 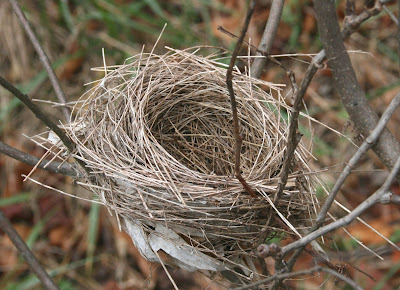 M. IN HER BURROW

Lately I have been: very busy; excessively busy; even ridiculously busy. Today was an elevenses day, an important birthday, and in less than a month I shall be buried by much in the way of graduation frolics. Overnight company to the tune of twelve... So I have been chopping and hoeing my yard and drudging and scrubbing my nest in order not to be shamed at various set-at-home events. I long for a gardener and a maid, but I long in vain. If you would like to be my gardener and maid, please inform me by the nearest fast-flying kestrel or any other winged thing—even a grackle would be acceptable.

Thank you for not abandoning me in the midst of my toils, all you note-leavers and email-senders and wafters-by… I have stayed in my burrow and worked, and I have not gone visiting or been much in evidence. Perhaps that is the way things should be. I’m not sure. I’m still thinking about it.

One of the reasons I have been busy is that I paused in the writing of stories and immediately was swept away by a spring spate of poems that has lasted for a pleasing-and-unusual length of time. They are very green, full of leaves and blossomings and mystery and muse. Much form, much narrative, much of a muchness…

Meanwhile I have read several rather stupid books, alas. I seem to have been reading the wrong novels. But I have also been reading Yeats and Charles Causley again, as well as some medieval and Anglo-Saxon poems. Most are re-reads, but I have also read the Robin Hood poems for the first time. It’s hard to say how old they are, as most of the existing copies seem to be rather late. X
BY HEART
x
June-bug resolution: memorize or revive the memory of one poem per week. We’ll see how long that lasts! This week: re-learned “Margaret, are you grieving.”

FROM KEANE, YEATS’S INTERACTIONS WITH TRADITION

For Yeats, who agreed with his mentor Blake that “the thankful receiver bears a plentiful harvest,” “works of art are always begotten by previous works of art” and “supreme art is a traditional statement of heroic and religious truths passed on from age to age, modified by individual genius, but never abandoned.”

In the “arts just as in ethics . . . all there is or has been on earth of freedom” and “masterly sureness” has developed only because of sustained “obedience” to what the undisciplined resent as “the tyranny . . . of capricious laws.”

The “most natural” state of the artist, “giving form in the moment of inspiration,” is “far from any letting himself go”; strictly and subtly” the artist “obeys thousandfold laws precisely then.”

This paradoxical fusion of autonomy and obedience, of gaiety under self-imposed constraint, is shared by Yeats, who eschews “free verse” in favor of those “traditional meters . . . I compel myself to accept” and without which “I would lose myself, become joyless” (E&I 522).

PHOTOGRAPH courtesy of http://www.sxc.hu/ and Crystal Leigh Shearin of Rocky Mount, North Carolina--a place where I once accidentally left all my nice new clothes in a hotel closet. I remember being a little girl and waking up on the train and seeing a neon sign for Rocky Mount and being happy because I was back home in the South and on my way to see my Aunt Sara in Savannah.
Posted by Marly Youmans at 4:00 AM 14 comments: