Thanks to inverarity for a thoughtful consideration of The Curse of the Raven Mocker and Ingledove at http://community.livejournal.com/bookish. Use the calendar or scroll down; the date of the piece is July 10, 2010. 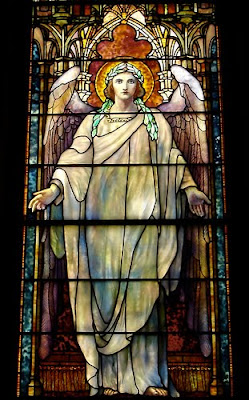 Since I'm off being writer-in-residence for the M.A./M.F.A. in children's literature at Hollins University, I missed something this morning--hearing the bicentennial hymn that Fr. Samuel Abbott commissioned from me for the Bicentennial of Christ Church Cooperstown. The new rector, Fr. Mark Michael, and Bishop Love were there, and I don't know who else... The marking of the Bicentennial has been going on for some time and is a big event in the life of the village.

Christ Church Cooperstown is a church with a literary pedigree. Novelist James Fenimore Cooper, on his return from Europe, decided it was nothing but a little country church and that he could make it into a spanking new Gothic bandbox. And that's just what he did. Cooper is its best-known writer, but there is his daughter Susan Fenimore Cooper with her beautiful Rural Hours, and there is Paul Fenimore Cooper with Tal. Those three are buried in the churchyard. The victim of Poe's critical pen, the popular poet W. W. Lord, was rector there and is buried overlooking Otsego Lake. And there are more, including the late Fae Malania.

So I was honored to make this little gift to the village where I have lived for more than a decade. The challenge was to write lyrics that would link physical and metaphysical and bind words to a particular church (also physical and metaphysical.) The concrete things that I used were the splendid Tiffany angels in the sanctuary, the setting of church and Cooperstown by Otsego Lake (called Glimmerglass by Cooper), and the excessive weather of the place.

The only other time I was asked to write a poem for an occasion was for a graduation, and I could not do it! My head filled with lint whenever I tried to consider it. It was a relief that this piece flowed easily from the fount and emerged in proper hymn meter. Although many academics hate to admit it, hymn lyrics have been one of the glories of writing in the United States, and I think it interesting to make my little foray into that arena.

The lyrics were sung to the tune of St. Anne, which church-goers of many stripes will know as "O God Our Help in Ages Past." Here's the commissioned hymn:

In ice, remember rampant green
And dawns that seared the night;
Within the winter of the year
Recall midsummer's light.

All things are passing like a mist
That rises from the lake
And floats, dissolving into sun
As heat and hue awake.

In Eden, they knew face to face
While we through smoky glass
Must peer--and as in sun's eclipse
May see a brightness pass.

In time beyond recall, a pane
Of glimmering was laid
'Twixt us and Him who knew our names
Before the worlds were made.

The angels standing in a church
Who watch with eyes that glow
According to the changing light
Have seen us come and go,

And we would be quick-eyed as they,
All night and mourning done,
Annealed in glory like a fire,
And brightening with the Son.

Photo credit: I'm not sure who took this one; the photographer is listed as "Cooperstown New York." If anybody knows, tell me!
Posted by Marly Youmans at 3:13 PM 11 comments:

That woman is blathering about writing again:
http://www.booklifenow.com/2010/06/where-the-stories-start-music-2/
*
The other day I had lunch with Jeremy Jones, who runs the Booklife website and "Shared Worlds" at Wofford. What fun! 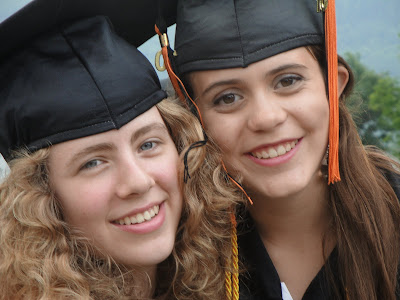 HAPPY
GRADUATION
FUNNY HATS: Rebecca with her friend and classmate Kim, daughter of novelist Peg Leon (who has a new book!)
I have survived graduation, despite the downpour halfway through, and my beautiful Rebecca is the possessor of a Regents diploma with Honors and Advanced Designation (I know, I know, you already read it on Facebook, and if you are a writer, maybe even expressed your comical dismay at the breeding of more writers!), a Clark scholarship, and the Janet Kerr Scholarship for "love of the language, the ability to enjoy great literature, a thirst for knowledge that cannot be quenched, and an attitude that shows a desire to learn and to expand personal horizons." 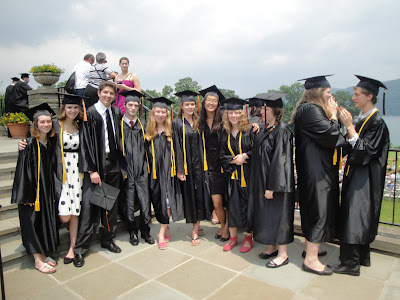 UPDATERY
Despite prom, baccalaureate, company, graduation, and more, I have been cranking my way through Hollins M. F. A. stories and only have three more to go...
ON THE FENIMORE MUSEUM STAIRS, ABOVE THE LAWN AND GLIMMERGLASS:
Just a few of many beloved friends--Molly, Emily, Evan, Pat, Vigi, Kim, Amy, Bugga, Tiffany, Hannah P, Connor. I also have pictures taken After the Downpour!
Posted by Marly Youmans at 12:18 AM 10 comments: