About the Declaration there is a finality that is exceedingly restful. It is often asserted that the world has made a great deal of progress since 1776, that we have had new thoughts and new experiences which have given us a great advance over the people of that day, and that we may therefore very well discard their conclusions for something more modern. But that reasoning can not be applied to this great charter. If all men are created equal, that is final. If they are endowed with inalienable rights, that is final. If governments derive their just powers from the consent of the governed, that is final. No advance, no progress can be made beyond these propositions. If anyone wishes to deny their truth or their soundness, the only direction in which he can proceed historically is not forward, but backward toward the time when there was no equality, no rights of the individual, no rule of the people. Those who wish to proceed in that direction can not lay claim to progress. They are reactionary. Their ideas are not more modern, but more ancient, than those of the Revolutionary fathers.  --Calvin Coolidge, from a speech on the 150th anniversary of The Declaration of Independence at teachingamericanhistory.org.
Posted by Marly Youmans at 12:16 PM 19 comments:

Email ThisBlogThis!Share to TwitterShare to FacebookShare to Pinterest
Labels: Declaration of Independence, Fourth of July

The title of doctor, nurse, technician all disappeared, and we all became providers. All those patients in our waiting room suddenly became consumers or clients. My grandfather ran a grocery store and had a lot of customers, and my father was a lawyer and had a lot of clients. None of those customers or clients would come to see me as their doctor with their illnesses today if I were a provider. The use of the terminology of “providers” and “customers” lowers all health care staff to the lowest common denominator and demeans the concerns of my patients.

When I sit in my examining room across the desk from my patient I face a human being who has come to see me as a doctor because they’re in search of the treatment of a real illness or concern. --Sidney Goldstein, M. D.

These issues are not unique to doctors, alas; administration burgeons in many places (universities and hospitals leading the way), and administrators are prone to an only-too-understandable postmodern confusion about what is meaningful and who is doing the essential work. This interesting tendency allows them to put administrators first, to eliminate meeting spaces that once belonged to doctors, to increase demands for paperwork so that there is less time for face-to-face communication between doctor and patient, etc. As a poet and novelist married to a physician, I see many changes in how medicine is practiced but also detect parallel changes in my own realm. In mine, the canon of great literature is abolished, all writing is "product" on a "platform," the strength of the writing is no longer uppermost in the minds of publishers, and the idea of a publisher supporting a writer's ongoing work is increasingly absent. In both fields, tradition and the opportunity for plain old human warmth continue to be on the wane. 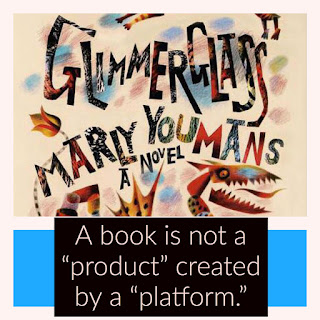