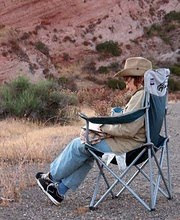 Marly: You're a Philly girl. Tell us about your life in California-- where you teach, where you live, and how you finally at long last learned to drive.

Robbi: There are a lot of stories in this question. I grew up in Philadelphia, but I spent most of my time running away from the bullies who desired only to toss me, always the shortest and smallest person in sight with only my wits to protect me, into the nearest trash can. That, and the hostility of Philadelphia generally, hayfever, and the godawful weather drove me out.

[The Road to California]

I never thought I'd go to California, but when I started applying for MFA programs, I decided to go to Irvine, CA, to UCI's MFA program, where I studied with Chuck Wright (most recently at UVA, I believe) and Jim McMichael. I had been accepted at all the programs I applied to, which included Missoula MT, Tucson AZ, and Carnegie Mellon, PA. All of them wanted me badly enough to offer scholarships and teaching. When Richard Hugo, then dying of the cancer that would eventually kill him, called me to offer me a scholarship, I nearly fell over!

I was fortunate, but I thought that I might as well go to Southern California, and I fell in love with the place and have been here ever since. It has been 30 years now.

I stayed on at the University, where I taught every writing class they had to offer, and got a PhD in Comparative Literature, writing a dissertation on play in the work of Vladimir Nabokov. I never did rework and publish that dissertation. The whole process of writing the dissertation and jumping through various hoops was pretty oppressive.

Instead, I took a job at a community college teaching composition, and have been there, at Irvine Valley College, a small, friendly place (mostly), with high standards. I develop my own curricula, which often combine film, literature, and interdisciplinary materials. This semester, my theme is "Crime and Time," with topics taken from the film by Stanley Kubrick, A Clockwork Orange. After writing a paper on that, they go on to consider Foucault's Discipline and Punish and then choose a topic to research related to punishment and crime, writing three researched arguments.

I change my theme every year. Next year I am on to The Uses of Narrative, considering the dangers and blessings of stories, considering Bettleheim's work on fairy tales, new research on placebos, etc.

[How Robbi Finally Learned to Drive]

Learning to drive is a whole other thing. I had 20 permits before I finally took the test. My misadventures with driving began when I was 16, in Philadelphia. My dad, who was bipolar and had Tourette's and rage, among other things, was the person who first tried to teach me, and he pretty effectively put me off of it completely by pulling my hair, stomping on my feet, yelling in my ears while I was trying to drive.

The kind of car I was trying to drive was completely unsuited for a small, slight person like me. It didn't have power steering, and I couldn't see over the windshield, even sitting on a phone book. Now that I have a little Corolla, and sit on two pillows, I am much better off, but at first, I smashed up a few dumpsters and hit a few parked cars.

It was finally thanks to determined (female) driving teachers and friends that I learned to drive. Thank you to them.

Marly: And tell us about a favorite recent California restaurant meal!

Robbi: This part of Southern California is full of wonderful ethnic restaurants. It is an extremely diverse place, home to more southeast Asians, for example, than Southeast Asia itself. I love Vietnamese food, so probably my favorite restaurants are Vietnamese. One I particularly love, and haven't visited for a while, is called "8 Courses of Fish." They keep on bringing out one course after another, raw fish, soup, a huge roasted catfish bronzed with sauce, etc., until you couldn't touch another bite, but it's a fascinating and fun meal, great for parties. I also like a new vegan restaurant I've discovered, "The Loving Hut," run by a religious group, where I discovered the joys of vegan Pho. Pho, in case you don't know, is the famous Vietnamese national dish of soup and noodles, generally spiced with star anise and, in its regular configuration, with hunks of beef tendon and other things floating in it. One sprinkles in Thai basil, bean sprouts, and sracha hot sauce (sp?), and it is an amazing treat.

The Quabbin rises as if bound to speak:
the four lost towns, Dana, Enfield,
Greenwich, and Prescott murmuring
of all that was, before the emptied
graves and cellar holes took on
the impersonal and public face of history.
Where now the bass patrol and deer
nose out the fattest berries, old rumors
and a persistent watching from behind.

Were the windows open when water
swept those barns and fields? Perhaps
a table set for tea and cake spun slowly
to the ceiling, flowers spilling
from their vase, family photographs
undeveloping to slicks of sepia
within the darkening, generic pool.

I can still see the steeple
dimpling the surface. Whole towns
caught, like a breath, beneath its
phantom shadow, as in a small
glass dome where no snow falls.