"Fire in the Labyrinth" in CLIVE HICKS-jENKINS 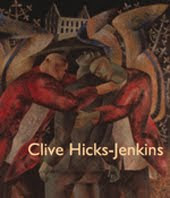 My gallimaufry of pieces, "Fire in the Labyrinth" (excerpts below), is forthcoming in a marvelous anthology titled Clive Hicks-Jenkins, available from Ashgate/Lund Humphries in conjunction with Grey Mare Press and Clive's 60th-birthday retrospective exhibit of paintings at the National Library of Wales. My contribution tells the story of Clive's withdrawal from the world (after a life in the theatre) at Tretower Castle and dives into paintings for wild Clive-ish new--an examination of the buttons of angels, a playground beyond the world, tea in the garden with Cocteau and manifestation of saints and much more.

FIRE IN THE LABYRINTH - CONTENTS

Tretower
Kevin and the Blackbird’s Nest
The Tea Party
Holy the Negative Space
The Congregation of Birds
Buttons
The Count of Three
The Book of the Phoenix, 1: 1-40
Tender Blackbird
Blue and Red
Labyrinth of the World

Some days the landscape is so harsh and cold and empty that he imagines himself the last human being in the world, and his tongue cleaves to his mouth. Some days the strange energies of the place possess him, and he could weep for the loveliness that cracks him in two. The very stones of Tretower seem to prophesy that he will not be as he has been, that the man who braves seven years in the wilderness may yet wrench a blessing from the place. When tourists appear from nowhere, he hardly remembers how to form syllables—then speaks all in a rush. But abruptly they are gone, and the bigness of the place and the silence that is no silence (insects, birds, the slamming of the wind) seizes him once more.

When he flings himself on the earth, Tretower looms over him. The birds come and cover him with leaves. The wild winds flatten and tear at the grasses. The frost giants tug at the stones.

“That was all long ago,” people say; “long ago he came out of the wilderness with his staring eyes that had the look of one who has wrestled with some fearsome angel.”

from "The Tea Party"

When did the saints appear in the garden? Half-hidden by trees, they are watching the two artists. The sunshine brightens on stone and leaf. The Virgin Mary steps into the clearing and looks wonderingly at the two men and the teapot and cups and the cut slabs of bara brith. Cocteau gets up immediately, but the painter does not move.

“The clarity of a dream,” he says.

The light increases enormously, and the paths and trees burn, every pebble and twig distinctly present. The painter’s hands tremble as he drinks in the brilliance and crisp edges of the garden, the glimpses of saints, and the young Virgin, her crimped hair veering from her head like a cockeyed halo.

This is what I wanted, he thinks, more light and every intent so clear. Color that says anything is possible. Nothing hidden.

Cocteau is looking at the pale lime green of his hands and laughing as shafts of young trees slide upward in unexpected blue twilight. Sunflowers break from the earth, shoving six feet into the air. God in the form of an angel plummets from the clouds and seizes the Virgin by the wrist.

The information below is from the Ashgate website, with a few small changes.

Critic Nicholas Usherwood has described the painting of Clive Hicks-Jenkins (b.1951) as 'reflective, expressive painting of the highest order'. From a background as a choreographer and theatre director, Hicks-Jenkins has since the 1990s become increasingly well-known as a painter, producing exploratory sequences of works that embrace diverse subject-matter with a consistent and distinctive vision. His paintings are now held in all the principal public collections in Wales and his artists' books are in libraries worldwide; he is a Royal Cambrian Academician and an Honorary Fellow of Aberystwyth University.

More information on a second book with a contribution from me and timed for the retrospective will be posted soon.
Posted by Marly Youmans at 9:50 AM