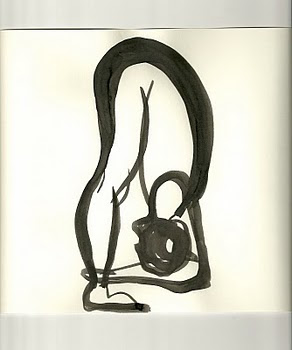 This "I Interview My Visitors" post is the first one made about a person I have met somewhere other than the e-aether--I knew Robbi Kellman when she was a mere sprat, a 4'11' package of spark. She is still in the shorty club, but she married tall poet Richard Nester and changed her name, her side of the continent, and much else. As she turns out to be wonderfully forthcoming, the current exploration will probably have to be a triptych . . .

Today everything (and I mean by that a great many Robbi-things) will relate somehow to the curious matter of yoga. I'm not quite sure why I'm starting with the yoga, but on a day when my laptop died and was resurrected with many pains as a sort of zombie laptop (moves slowly, misbehaves, eats my brain), I think it will be relaxing.

(The illustration above is by Robbi Nester's cousin, Nina Canal.)

Marly: Tell us about your interest in yoga and how it led to a series of poems.

Robbi: I have done yoga for a long time in an informal, occasional way, and much of it has been Iyengar yoga, developed by the yogi, B.K.S. Iyengar, in Pune, India, and his daughter, Geeta Iyengar.

However, until I decided for a number of reasons to get serious about yoga, doing it at least 5 times a week for at least an hour a day, I didn't really get the benefits or begin to understand what it had to offer me.

I inherited a neurological surprise package from my Eastern European Jewish forebears, who lived for centuries sequestered in shtetls, where there was much intermarriage within the tiny Jewish communities of local villages. This meant that the disorders as well as the gifts of these people were handed down.

I got my maternal great-uncle Isaac Rosenberg's ability to write poems, but I also got a bit of my paternal great-grandfather's bum wiring, manifested by a fairly severe case of G.A.D., generalized anxiety disorder. In order to live a healthy life, unimpeded by this disorder, I need to do yoga regularly. Anyone who has known me before and after yoga can attest to how much difference yoga has made for me.

On one particular occasion last year, I attended my teacher Denise Thibault's yoga workshop on Iyengar's Emotional Stability Sequence of yoga asanas (postures). I was immediately suffused with a sense of well-being and relaxation, body and mind, and was so grateful for this that I began writing the series of poems, with the thought that I might give them to Mr. Iyengar for his 91st birthday.

I finished the poems themselves in time for this occasion, though the illustrations meant to go with them have not been completed as of this moment. My cousin Nina Canal, who lives in Marsailles, France, has been working on those in her spare time, between gigs as a musician (she has recorded 7 albums) and a designer (she has a boutique in Paris).

It has been impossible for me to send the poems to their intended recipient, since getting to Mr. Iyengar is not easy. He has an enormous following, and is surrounded by a huge and very possessive hierarchy of people who protect his time and energy. I just don't have enough pull to get my poems sent to him. It is possible that poetry is not something he or those around him have that much interest in, or perhaps the people around him don't recognize a poem when they see it. I guess it is a small, specialized sort of thing, and perhaps not all that compelling to some.

The moon swells like a seedpod.
Inside the quiet studio, I take
my aching head into my hands,
fingers web to web. A breath,
and then this awkward frame
ascends, becomes an aspen
flexing in a nonexistent breeze.
Grounded in air, movement merges
with stillness, my ear a vehicle
for surging tides, the galaxies’
faint hum. Everywhere
and nowhere, the worlds
fall away, balanced
on these two arms. 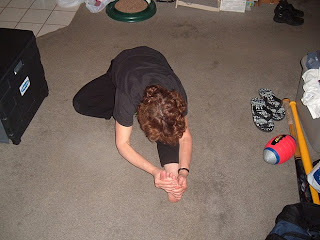