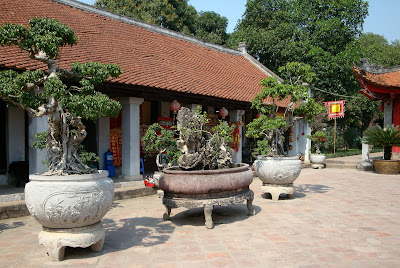 In the fall of 2009 my husband and I went to Thailand and Cambodia for a conference (his) and travel. Currently he is back in that part of the world--in Vietnam as a volunteer, doing lectures and helping with neurology patients, etc. I could not resist this anecdote from a letter written today. It is a pleasing mixture of the sad, the surprising, and the downright hilarious. I especially laughed at the red part (you'll see.) And I am glad he signed off as "Your loving husband!" (Names changed to protect the semi-innocent.)

Later thoughts: I am finding the long firecracker string of facebook comments amusing as well--particularly the ones about "red" and the bittersweet comedy-of-errors remarks. I should have titled the piece "Innocent Abroad." Twain could have done a lot with Mike and this little incident. Somehow Thailand and Cambodia didn't prepare him for the surprise of this moment! Also, I realize, reading through those comments, that it's not wholly clear that "Phuong" is a doctor, based in the U. S. Clearly Mike had just seen her for the first time, though, and I suppose she could have been something else entirely, passing herself off as a doctor--she is creative, after all--luckily she was not something else entirely!
I had a funny thing happen today. I was supposed to meet with Dr. Mai at noon and was sitting in the lobby waiting for her [but she did not show up.] A Vietnamese /American lady who was about 30-35 years old came up to me and in pretty good but accented English asked me if I was with [the medical volunteer program.] I said yes, and she introduced herself as Phuong. She was odd, pleasant, not pretty. Almost immediately she asked me if I was doing anything and if I had eaten. The answer was no to both. Then she asked if I would like to go and have lunch at her in-laws' house. I thought this was a little strange since we had only known each other about 5 minutes, but I thought the idea of going to a regular Viet house was interesting. So we got a cab and took it to a very warreny part of town. When we got out, her in-law (I'm still not sure what his exact relation was, perhaps her brother's wife's father?) came down a narrow alley on a scooter.

It seems the house is still pretty far away, but the alleys are too close for a cab to negotiate. So I get on the scooter, and he takes me down these seemingly endless alleys that are about the width of the space between ours and the M--'s garages. He finally drops me off at the house, which is a small but tidy thing, maybe two rooms down and two rooms up. It is decorated with the most extravagant Catholic imagery, statues, posters, a bust of Pope Benedict and a glass church with a neon "Ave Maria," neon halos, and a little flashing light show around the Infant of Prague. The mother-in-law and a pleasant toothless crone were there to greet me. I started to take pictures of the Catholica. [Marly: What a dratted tourist!]

Soon Phuong arrives. A table is brought out, and beer poured over ice. We have a nice if somewhat over fishy lunch. I eat mostly rice and a little dried pork and sauteed green beans. We stay about 90 minutes. I am surprised how much they make of me. Some other relatives arrive. He and his wife (who was VERY stylish) had just been to a wedding. He is a thoracic surgeon. I had hoped to ask him what his practice is like but it turns out he is too drunk from the wedding and has fallen asleep in the kitchen. Not too drunk to drive a moto in suicide traffic, but too drunk to stay awake. After a while we leave and walk back to the main road because the father-in-law got too drunk over lunch and he is taking a nap. The mother-in-law and sister-in-law are walking back with us and quite fawning over us both. We get back to the road amid extravagant hugs and get a taxi. On the way back Phuong is very quiet, but about halfway back to the hotel we have the following conversation:

Phuong: "I have a confession to make."

Phuong: "I told them you were my fiancé."

Michael: "You are spoofing me."

Phuong: "No. You see, in Vietnam a girl my age should be married. My mother is ashamed that I'm not. I couldn't stand to embarrass her in front of her relatives so when I saw you, I just thought about having you come and see them so they would think I wasn't always going to be single."

Michael: "That is really not a good enough reason. Besides, I'm like 20 years older than you."

Phuong: "That is alright. Since you are so plump and red they think you are really rich, which is more important."

Michael: "What happens when we don't get married?"

Phuong: "I hadn't thought that far ahead."

***
Photograph: The photo of "The Temple of Literature" courtesy of sxc.hu and Eva Schuster of Germany.
Posted by Marly Youmans at 2:00 AM

Email ThisBlogThis!Share to TwitterShare to FacebookShare to Pinterest
Labels: Vietnam