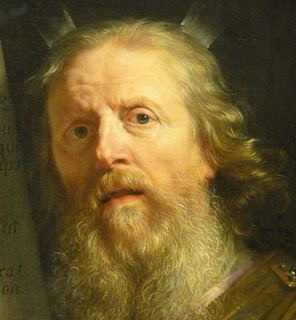 "It's the high-level of orderliness that is so distinctive -- reaching down into the structures of appearance (light over skin over flesh over bone)and composing them into sweet, poignant chamber music --- that is so fine in the detail and so grand in overall effect. Can you really see this Moses leading an illiterate rabble of fleeing slaves accross the desert ? This is an intelligent, sensitive scholar of the 17th Century, pondering the great spiritual issues of his time."

Today I am going to recommend a blog that has been in existence for years but is, to my mind, under-visited: Mountshang, located at http://www.mountshang.blogspot.com/. Chris Miller has some fifteen blogs, covering various fascinations and passions, so it would not be surprising to find that some were visited more than others. I like Mountshang very much. Chris goes to see exhibitions in Chicago and reviews them, regularly going out and bringing back the goods in the form of many photographs and opinions about the work. He is funny. He is irreverent. He takes curators to task. He takes artists to task. He occasionally takes people to task in every aspect of life and makes sweeping judgments. He is a distinct figure, drawn sharply in his loves and peeves. In other words, he is wonderfully opinionated. I don’t always agree with his opinions, but that’s not the point. They are stimulating opinions that make me question what I think. When I climb the mount and visit with him, I encounter an astonishing number of visual artists whose work I would never know existed were it not for Chris and his great job of both hunting and gathering.

I live life dangerously by ignoring the advice of Chuang Tzu: "Your life has a limit but knowledge has none. If you use what is limited to pursue what has no limit, you will be in danger". Badly spoiled by my wife, I spend mornings in sculpture studio, afternoons in record shop, evenings on the internet, weekends at the Palette and Chisel Academy and Art Institute of Chicago, and, the time spent in between, reading ancient history."

He gives us tons of pictures. His prose appears in a quirky mode that looks rather like free verse but is more interesting than a lot of free verse.

What a fun story!

Copeland Burg was a crime reporter
who started dabbling in art,
attacked Mrs. Logan's "Sanity in Art" screed,
and was told by his boss to
"Stick to rape and murder"

And his father
was a circuit judge
who was lynched by ranchers
in Montana?

No wonder his life was so confusing,
and eventually,
he quit his day job at the newspaper,
and just spent his life painting.

ANOTHER SAMPLE, WITH UNEXPECTED OPINIONS:

Here's the kind of nightmarish stuff
I really can't stand.

Except that -- I couldn't stop
looking at it,
like this creepy statue [links elsewhere]
from the Aztec empire.

Here's a huge painting
that was hard to ignore,
perhaps because of those
"superficial skills that denote art"

As a viewer,
I feel like John Belushi in "Animal House,"
peering through the window
of a sorority house.

The ladder is starting to fall backward!

ANOTHER SAMPLE SHOWING HIS LOVE-HATE RELATIONSHIP
WITH THE ART INSTITUTE OF CHICAGO:

Perhaps I'll calm down
in a few months,
but the only word
I can find for the new
Roger L. Weston Wing
of Japanese art
at the Art Institute of Chicago
is
Disaster

And I could kick myself
for not photo-documenting
the display that it replaces.

Perhaps it's only sentimentality
that attaches me to the
quiet, meditative space that
the museum's collection of
Medieval Japanese sculpture
used to inhabit.

But I think that Cleo Nichols,
who designed the space in 1992,
successfully solved the problems
involved in displaying a diverse collection
of Buddhist sculpture
that originated in many different
centuries and temples,
and cramming it all into a small,
but aesthetically pleasing space.

The key, I think,
was letting one statue sit freely
on a platform in the center of the room
protected by a railing instead of a glass case,
allowing it to command the space of the room;
then setting the other sculptures into
glass protected niches set into the
surrounding walls;
and leaving the whole room dark,
with dramatic lighting on each statue.

Now,
as you can see at the top,
the pieces have been set into
glass display cases that protrude into the room,
making the entire display
feel like those cases
of ethnic paraphernalia
that used to be found
in the Field Museum of Natural History
(back before they updated their displays)

The sense of sacred space is gone.

And the room feels dry, dead, and clinical.

(though maybe that's O.K.
for displaying the pre-Buddhist
tomb effigies that are shown above.
After all, those pieces were made for a crypt,
not a shrine)

Thankfully,
they mostly left the Ando Gallery alone,
except that even there
they damaged it
by removing the heavy glass doors
that used to seal it off and make it feel
like such a quiet, secluded place,
that was part of Japan
instead part of an art museum.

What was the head designer,
Kulapat Yantrasast,
thinking about
as he made these woeful changes?

And as final slap
in the face
of anyone who enjoys
the rest of Asian art,
the Chinese painting and Korean ceramics
that used to be located in this area
have been removed,
while announcing that:

A statement which would only come true
if some of that new space
were ever used to display the Asian art
that was taken off view
to make room for the Japanese.

But I think that
no more new space is left.

It's all been taken
by the new galleries
of African and Pre-Columbian art.

But now that I've vented my disappointment,
here's some of the good stuff
that has been put on display here
for the very first time.

Much of it coming from the collection
of Roger L. Weston.

Here's one the signature pieces of contemporary art
that will be on display for a very long time
(it's too big to be moved,
and had to be installed before the building
was finished)

Do you notice what has drawn the attention of the crowd?

Because without that label's explanation,
who would give a second thought to this
meticulous reproduction of a rotting log?
(commissioned by Charles Ray)

And the light in the gallery is so dim and flat,
if the carving on that log were actually beautiful,
you would never know it.

This pattern was repeated,
like wallpaper,
over an entire small room.

Something about racism and national guilt.
If you can't figure it out,
read the label.

Chris appears to have grown up in a colorful family. His father was Midwest artist (sculptor, primarily, I believe, but also printmaker and painter) and important teacher-to-sculptors R. J. Miller, who appears to have a colorful, salty way of addressing the world that no doubt infected young Chris with the ability of making pithy and sometimes devastating remarks. Dick Miller was student of Milton Horn. He kept learning new technologies and modes and later designed sculptures via computer design. Chris is just as sharp on his father’s work as with anybody else’s, by the by. Evidently Chris has what his father called (with approbation) a “wild head.”

HOW ABOUT A LITTLE BITE MORE?

Rushing out of the modern wing in anger,
I come across one of its benefits:

a new (though small) area
devoted to Medieval Islamic ceramics
and painting.

Ahhhh -- the visual delights of work
that does not require
explanatory text!

Athough much of the space vacated by modern painting
has been filled with the new
"Eloise W. Martin Galleries of European Decorative Art"
... i.e. a lot of furniture, with some ceramics,
most of which fails to excite me.

Which reminds me
of one final question:

why is the museum director (James Cuno)
called
"The Eloise W. Martin Director" of the Art Institute?

Shouldn't he be called
"The People of Chicago Director" of the Art Institute?

How we relish you, you impetuous boy of . . . sixty or thereabouts! The Art Institute staff is probably fuming mad at him, but the truth is that he is its greatest lover in his own curious way.

I love people, I love energy of personality, I love character: Chris is character writ large.
Posted by Marly Youmans at 2:00 PM