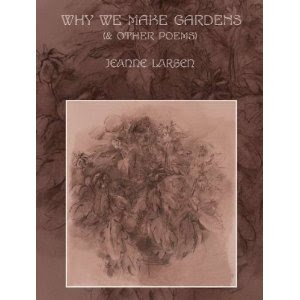 More light in the darkness of the year . . .
I have returned after a trip to Bard-and-back with much dirty college laundry (and a child, a precious child) and a middle school concert and a staying-up-late-and-getting-up-early time to help with test-studying for the youngest, whose study hours were eaten up by said concert plus wrestling. So today I feel like an old-fasioned zombie: not those new, fashionable zippy ones but a lurching, slow-moving monster. But I am going out to lunch with painter friend Yolanda Sharpe (that will be fun) and to a show with work by another friend, Makoto Fujimura. Unfortunately, the shambling zombie-of-me is rather sleepy.
*
Perhaps what I need is a poem. That might wake me up. And right next to me is a stack of books that includes one of my birthday books, Why We Make Gardens, by another friend, Jeanne Larsen. I have a feeling that 2010 has been a grand year for friends to get work done and out in the world. This book is a lovely production from Judith Kerman’s Mayapple Press in Bay City, Michigan. (Judith is a much-published poet who founded Mayapple Press in 1977, as well as Earth's Daughters, the oldest feminist literary magazine still publishing, in 1971.) The cover illustration is “Kroger’s Chrysanthemums” by Jan Knipe, and it adds much to the pleasure of holding this marvelous (as in Andrew Marvell and his gardens!) little book.
I’ll think more about Jeanne in a moment, but for now I am busy waking up with a poem fit for the season.
GARDEN AFTER WINTER’S FIRST STORM
Over snowfall, a layer of sleet:
rustling like white leaves, it fell through
night. Borders vanished. The world

x-rays. These harmonious outlines
are phenomena standing, noiseless,
in self-silhouette, given

dimension by time. Day’s moods
in their light become no more
than petals. Out in the sunbed, a dry

I feel more wakeful already because Jeanne is being wakeful. Immediately I like the rustling that leads to silence, the idea of “self-silhouette,” the dry and austere rainbow, the shift of spectrum, the move from the riotous to the more streamlined world. The complicated, multi-syllabic line four gives way to utter simplicity: “Here is / what’s left.” The poet has a good ear (singing to us from the start through consonance like snowfall-layer-sleet-leaves-rustling, assonance like sleet-leaves, and the occasional rhyme.) The stanza breaks sometimes rise to significance (a thing that would be annoying were it constant, but is just the right amount here), as when she breaks between “The world” and “is suspended” or gives us surprise in the move from “sunbed, a dry” to “rainbow.”
Outside it is snowing again. It is, of course, almost always snowing. And I am wakeful, Jeanne’s words now moving around in my head and, I hope, stirring in yours.
Jeanne Larsen’s first book, James Cook in Search of Terra Incognita, won the AWP annual award series in poetry. She subsequently published two collections of translations as well as three novels, Silk Road, Bronze Mirror and Manchu Palaces. A new novel, Sally Paradiso, is out in e-format from Brown Fedora Books. Her poetry, fiction, and essays have appeared in many journals, and she has received numerous grants and awards. Most of the time, Jeanne Larsen lives in southwest Virginia’s Roanoke Valley, just west of the Blue Ridge. She is currently Susan Gager Jackson Professor of Creative Writing at Hollins University.
Oh, and I also like her translations very much! Those would be Willow, Wine, Mirror, Moon: Women’s Poems from Tang China from BOA and Brocade River Poems from Princeton.
She also makes a mean mango salad.
Posted by Marly Youmans at 9:59 AM