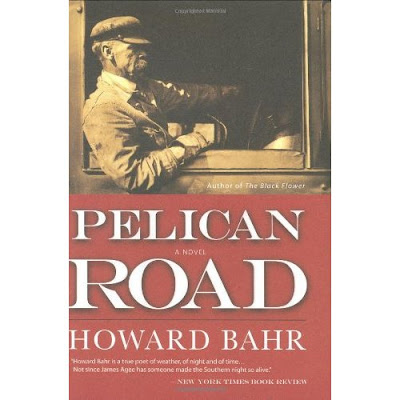 Howard Bahr is a penpal of mine, my only friend with whom I exchange typed or handwritten notes, nonsense, and bits of writing; all the others are email or facebook friends. No doubt such old-fashioned epistolary friendships are part of being a Mississippi gentleman. A veteran of the Navy and Vietnam, Howard was once a railroad man, a yard clerk and brakeman; his five years on the rail are the root of Pelican Road. He has also been curator of Rowan Oak; he has been an English professor—as he still is, down in Jackson, at Belhaven.

Modest despite many awards, he has published: Home for Christmas; The Black Flower: A Novel of the Civil War; The Year of Jubilo; and The Judas Field. His most recent book, Pelican Road, was a casualty of the collapse of MacAdam/Cage. It’s out in the world, but Howard is not receiving (as yet) any monies from the book. I don’t know what the solution to that is; perhaps his readers should each send him a royalty check. (I wish somebody would present him with a nice fat grant!)

I picked the following passage from Pelican Road because it explains the title and because it illustrates some of the author’s many virtues: his mastery of the evocative list that lays out space and clarifies time and landscape; his immersion in the past, rather than treating it as a stage on which modern characters in fancy dress move (once he was kind enough to tell me that my books with historical settings treated the past not as inaccessible time but as a place I could visit, and I feel the same way about his); his subtle comedy (“shrill with the recent outrages of the Japanese army and the Louisiana legislature”; his keen eye, as quick as that tilting eye of the crow; his exactitude in description; the amplitude of vision, sweeping like the railroad itself and stopped, here and there, by motion or a quick brake for an image. The world it declares is cold, dark, and beautiful, punctuated by death.

* * *
On a cold afternoon two days before Christmas, a freight train waited in a passing track below the Pearl River Bridge, just inside the state of Louisiana. The locomotive, number 4512, was shrouded in steam, the dimmed headlights pointing north toward a long curve and the river beyond where soon the fog must rise. The locomotive’s tender, heaped with coal and rimed with frost, was coupled to seven cars of LCL freight, two odorous cars of livestock off the Southern Pacific at New Orleans, a government flatcar with a shrouded artillery piece, another with a dismantled Brewster Buffalo pursuit plane, and a wooden caboose once the color of red clay, now almost black with grime. A curl of smoke rose placidly from the stovepipe of the caboose; the marker lamps showed green ahead.

Between the rails, just ahead of the engine’s pilot, lay a sheet of newsprint—in fact, the opened front page of yesterday’s Baton Rouge Advocate, shrill with recent outrages of the Japanese army and the Louisiana legislature. Farther along, almost to the main line switch, a black crow, stark against the white ballast, worked over the last dingy scraps of a dead raccoon. In the manner of crows, he was watchful, and when a vagrant wind plucked at the newspaper, he tilted his eye toward the movement.

Suddenly, the paper spread itself and leapt aloft on the wind, danced, twirled, spiraled upward toward the gray sky as if in panic or joy. In all that still and cold-shrouded landscape, nothing, not even the bird, seemed so much alive. The crow flapped away from his meal and lit teetering in the crest of a short-leaf pine. The paper went on dancing and settled at last over the matted fur and bones of the raccoon. Then the crow, crying his opinion across the afternoon, lifted from the pine and creaked away southward.

The wind died as quickly as it came. In one of the cattle cars, a calf was bawling. The air pump of the locomotive throbbed intermittently, and now and then a white plume of steam jetted noisily from the cylinder heads. Save for these things, the world was silent. The Piney Woods—dense, shadowless, empty of sound and movement—lay close around. Where the passing track joined the main, the lens of the switch target gleamed like a polished emerald.
Pelican Road, whence the train had come and to which it would soon return, was the name given the two hundred and seven miles of ballasted heavyweight main line rail between Meridian, Mississippi, and New Orleans. The name had always been there, older than the railroad, older than any of the men who worked on it now.

***
Interesting fact: Howard and I have a secret pact pertaining to chickens and books. Of course, you’ll have to read our books to figure it out.

If you want to read about when I met Howard Bahr (there is also a chicken), hop here: http://thepalaceat2.blogspot.com/2006/07/palace-storeroom-memory-from-after.html.

***
From Booklist:
After penning a highly praised trio of Civil War novels—The Black Flower (1997), The Year of Jubilo (2000), and The Judas Field (2006)—Bahr turns to the 1940s and a close-knit group of railroad men. Bahr, a former railroad man himself, is intimately familiar with that world (“an alien, masculine world with a language all its own”) and here deploys many lovingly detailed passages describing the mechanics and machinery. A. P. Dunn, engineer on a freight train, has been suffering from memory loss, but his crew is reluctant to confront him because of his loyal service and his generous mentoring of the younger men; meanwhile, Artemus Kane, a conductor on a deluxe passenger train who is also a World War I vet haunted by his battle experiences, wonders if he has finally met a woman he can commit to. Due to a series of miscommunications, the two trains seem to be on a collision course in spite of the crews’ long years of experience and dedication to their work. Running right underneath the suspenseful narrative is a beautifully wrought view of the world as a lonely and unforgiving place. --Joanne Wilkinson

“…a mature work of fiction by a gifted writer — affectingly eloquent and fearless of complexity and ambiguity…Bahr is a writer with a fluent lyric facility, subtly ensuring that the brutality of his narrative events never becomes numbing…a beautifully wrought novel that deserves a wide audience.”
—Los Angeles Times

“[Bahr] is a true poet of weather, of night and of time…Not since James Agee has someone made the Southern night so alive, so intimate, so orchestral…Along with the sweeping, cinematic story of rebellion, loyalty, revenge, and reawakened romance, Bahr’s evocation of place and time is the most enduring achievement of the novel.”
—New York Times

“Bahr masterfully portrays ordinary men [whose] belief in courage, honor, pride, and comrades sustains them but leaves them empty but for their terrible memories and grief…beautifully written…”
—Booklist
Posted by Marly Youmans at 12:02 AM

Email ThisBlogThis!Share to TwitterShare to FacebookShare to Pinterest
Labels: Home for Christmas, Howard Bahr, Pelican Road, The Black Flower, The Judas Field, The Year of Jubilo