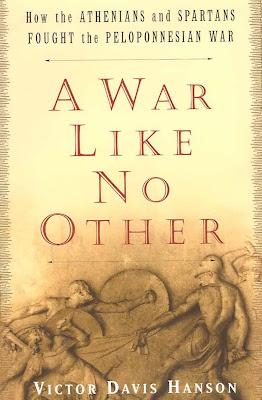 Last night was battling snowstorms to and from Mohawk, where N, now 13, won two wrestling matches, 4-3 and 8-0. When we came out of the gym, huge flakes of snow were falling and the world had changed. Our eldest, Ben, was fetched home from the Albany airport after the meet, and now I must abandon him (snoozing happily) and head out to Annandale-on-Hudson to fetch home the middle child, who I do hope woke up in time for her French exam. So I do not really have time for thoughtfulness about a book but must putter off into the snowy, snowing wilderness between here and there. It’s a gorgeous snow coming down—just wish it would go away and come back at a more convenient time.

Since I won’t be around till later, I’ll cheat and offer a quote for the day and recommend a book that was popular in our family. Not long ago my husband read A War Like No Other: How the Athenians and Spartans Fought the Peloponnesian War (Random House, 2005) by Victor Davis Hanson, and enlivened life for a while by reading passages and dropping weird tidbits (as, the Spartans hated trade and merchants and used long iron bars for money—no pocket change!) He enjoyed the book very much, its clarity about a war that lasted so long and its wealth of surprising information, the work of a retired professor of classics and scholar of military history. Later he passed it on to our eldest son. It's on my To Read list. I thought of the book this morning because in noodling about the web (while I was helping our youngest grasp convection, absolute zero, specific heat, and other fascinating subjects), Mike came across an article by Hanson defending the liberal arts, and later he read it to me over tea and corn muffins baked in the shape of teddy bears. I throw in the teddy bears as an antidote to Spartans. Of course, they were baked in cast iron molds, so perhaps they are already little Spartans.

Here is a little scrap of Hanson’s thought, saved from breakfast with the bears:

The more instantaneous our technology, the more we are losing the ability to communicate with it. Twitter and text-messaging result in an economy of expression, not in clarity or beauty. Millions are becoming premodern -- communicating in electronic grunts that substitute for the ability to express themselves effectively and with dignity. Indeed, by inventing new abbreviations and linguistic shortcuts, we are losing a shared written language altogether, much like the fragmentation of Latin as the Roman Empire imploded into tribal provinces. No wonder the public is drawn to stories like "The Lord of the Rings" and "The Chronicles of Narnia" in which characters speak beautifully and believe in age-old values that transcend themselves.

Life is not just acquisition and consumption. Engaging English prose uplifts the spirit in a way Twittering cannot. The latest anti-Christ video shown at the National Portrait Gallery by the Smithsonian will fade when the Delphic Charioteer or Michelangelo's David does not. Appreciation of the history of great art and music fortifies the soul, and recognizes beauty that does not fade with the passing fad.

America has lots of problems. A population immersed in and informed by literature, history, art and music is not one of them.
Posted by Marly Youmans at 9:14 AM

Email ThisBlogThis!Share to TwitterShare to FacebookShare to Pinterest
Labels: A War Like No Other, Victor Davis Hanson