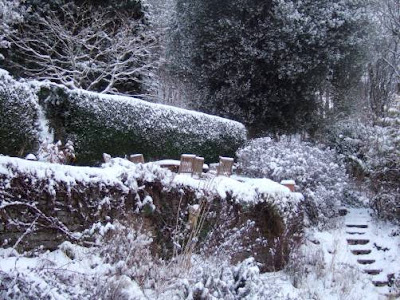 The snowy garden photograph was taken by friend and penpal Clive Hicks-Jenkins. I hope he will forgive me for snitching it from his lovely artlog!
http://clivehicksjenkins.wordpress.com/2010/12/19/snowed-in-again/

Having spent quite enough time this morning as a laundrywoman and ferrywoman, I am looking at the galleys for The Throne of Psyche, forthcoming from Mercer University Press in March. Marc Jolley, the director, is expanding the press and building up a literary house, and I must say the recent books I have seen are beautiful and unusual. And while galleys are never quite the same as a book, I love the little surprises here: those leaves! Just a few: sparing but tumbling across a page.

I’m going to offer two posts of my own work since my yesterday was devoted to Christmas preparations—and today to a certain amount of drudgery, more Christmas preparations, and a wrestling meet (did I say that N won at Center State meet, 8-6, 4-0, 6-0? Am I proud to have given birth to that most unexpected thing, an athlete? Yes, I am! He certainly does not take after me in that way. Perhaps he takes after my father, who ran six miles a day until he became ill, and who would steam past the undergraduates on the university track.)

The first poem is perhaps a little bit of a pinprick to Billy Collins; it was first published in The Raintown Review in an issue guest edited by poet Joseph Salemi. It will be in the second section of The Throne of Psyche.


FIRE IN ICE
A riposte to Billy Collins, “Taking Off Emily Dickinson’s Clothes”

For your undressings—don’t rend the haze
Of veils that shields you from her blaze.

When flames are jostled by a bold
Adept, her fingers tipped with cold.

And though in after-hours she threads
The dew she plucks from spiderwebs,

Or answers Who? to midnight’s owls,
Or strokes the cats, returned from prowls—

Or takes to skipping to and fro
With moonlit maidens made of snow,

She’ll freeze, inviolate and meek,
If you so much as try to speak.

Shove off—avoid those brazen wings:
She’s not for your unbuttonings.

The polished stone above her head
Declares her state among the dead:

Here waits that sphinx whose secret power
In riddles found her finest flower.
Posted by Marly Youmans at 10:26 AM