Readings for the 12 Days of Christmas: Viktor Frankl 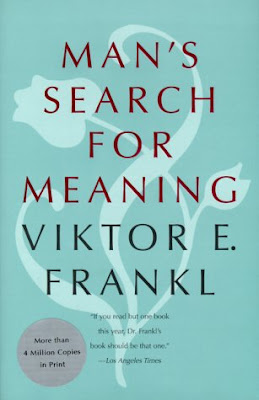 How about an old book for today, though new to me--a reading from the only book shelved in the "self-help" area that has ever drawn me. It is also the only book I read this year that made me weep.

Flap copy: Man's Search for Meaning has riveted generations of readers with its description of life in Nazi death camps and its lessons for spiritual survival. Between 1942 and 1945 psychiatrist Viktor Frankl labored in four different camps, including Auschwitz, while his parents, brother, and pregnant wife perished. Based on his own experience and the stories of his many patients, Frankl argues that we cannot avoid suffering but we can choose how to cope with it, find meaning in it, and move forward with renewed purpose.

Born in Vienna in 1905, Viktor E. Frankl earned an M.D. and a Ph.D. from the University of Vienna. He published more than thirty books on theoretical and clinical psychology and served as a visiting professor and lecturer at Harvard, Stanford, and elsewhere. Frankl died in 1997.

"Can't you hurry up, you pigs?" Soon we had resumed the previous day's positions in the ditch. The frozen ground cracked under the point of the pickaxes, and sparks flew. The men were silent, their brains numb.

My mind still clung to the image of my wife. A thought crossed my mind: I didn't even know if she were still alive. I knew only one thing--which I have learned well by now. Love goes very far beyond the physical person of the beloved. It finds its deepest meaning in his spiritual being, his inner self. Whether or not he is actually present, whether or not he is still alive at all, ceases somehow to be of importance.

Another time we were at work in a trench. The dawn was grey around us; grey was the sky above; grey the snow in the pale light of dawn; grey the rags in which my fellow prisoners were clad, and grey their faces. I was again conversing silently with my wife, or perhaps I was struggling to find the reason for my sufferings, my slow dying. In a last violent protest against the hopelessness of imminent death, I sensed my spirit piercing through the enveloping gloom. I felt it transcend that hopeless, meaningless world, and from somewhere I heard a victorious "Yes" in answer to my question of the existence of an ultimate purpose. At that moment a light was lit in a distant farmhouse, which stood on the horizon as if painted there, in the midst of the miserable grey of a dawning morning in Bavaria. "Et lux in tenebris lucet"--and the light shineth in the darkness. For hours I stood hacking at the icy ground. The guard passed by, insulting me, and once again I communed with my beloved. More and more I felt she was present, that she was with me; I had the feeling that I was able to touch her, able to stretch out my hand and grasp hers. The feeling was very strong: she was there. Then, at that very moment, a bird flew down silently and perched just in front of me, on the heap of soil which I had dug up from the ditch, and looked steadily at me.

There is little to tell and it may sound as if I had invented it; but to me it seems like a poem.

This young woman knew that she would die in the next few days. But when I talked to her she was cheerful in spite of this knowledge. "I am grateful that fate has hit me so hard," she told me. In my former life I was spoiled and did not take spiritual accomplishments seriously." Pointing through the window of the hut, she said, "This tree here is the only friend I have in my loneliness." Through that window she could see just one branch of a chestnut tree, and on the branch were two blossoms. "I often talk to this tree," she said to me. I was startled and didn't know quite how to take her words. Was she delirious? Did she have occasional hallucinations? Anxiously I asked her if the tree replied. "Yes." What did it say to her? She answered, "it said to me, 'I am here--I am here--I am life, eternal life.'"
Posted by Marly Youmans at 2:00 AM