Readings for the 12 Days of Christmas: "Mark this Flea" 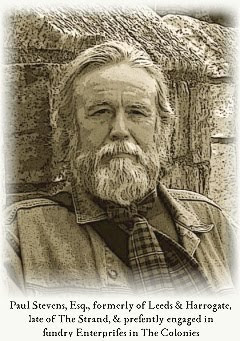 On the third day of Christmas, I'm recommending an online 'zine, The Flea, edited by that cunning man, Paul Stevens.

In the Flea's own words: THE FLEA Broadsheets are a Seventeenth Century brainchild of Mr. Paul Stevens, upon whom the conviction periodically seizes that he dwelt in that era in a former life, and indeed was an associate of Jack Donne (one of whose metaphysical meditations has inspired the title), Andrew Marvell, Will. Shake-speare, Ben Jonson, Sir John Suckling, & diverse others.

The intent of THE FLEA broadsheets is to serve the Soveraigne Muse, by publishing first-rate poems which accord with Her Ideal of poetic Delight, in an occasional Broadsheet, using cutting-edge Seventeenth Century Technology, & state-of-the-art Alchemy; as wrought by the excellent skills of Mr. Peter Bloxsom of Netpublish, a cunning & learned Doctor of the dark electric Arts, who, in devising this Metaphysical Flea, to hop nimbly along the Hermetic threads of the Ætheric Web, is a very Dædalus for Craft, & yet himself a poet of most subtle Wit and Cadence, an Orpheus who masterfully plucks the poetic Lyre.

Sample poems, plucked from the swollen belly of The Flea, follow. For more poems or to learn something about these poems, sproing upward like the hoppingest flea to http://www.the-flea.com.


The Drift Glass
by Cally Conan-Davies

Along the spit of shell-packed sand,
while combing for the green, the blue,
the rarer bits of washed-up glass,

I nearly didn’t bend to take
the common piece of bottle-brown;
but shapes embossed across its face

intrigued me, so I picked it up
and found ‘TO BE’—a fragment phrase.
I showed it to a fisherman

and asked him what it might have meant.
He rubbed the risen words, and said:
“A warning. ‘POISON’ once it read,

‘NOT TO BE TAKEN’”. But it was.
The ocean took what hand had tossed,
dulled its gleam with salt and sent

the hazard to be broken up
by tides, the edges blunted by
the run of water over it

and let it drift onto this spit
as if pronouncing from the sea
the curse, the cure, the cusp—to me.

Fasten your seat belt, close your eyes, ignore
the musical panic caused by what you hear,
count very slowly as the engines roar,
clutch at the arm rest as the time draws near
for that unstable moment as the vast
body turns round and moves towards the spot
where it will snarl and tear along so fast
that you relive your past, then like a shot,
up, bumping through the cloud towards the sun
breaking the hold of earth with jolts till high,
suddenly freedom floats you through the spun
wisps Leonardo dreamed of in a sky
he never saw except inside his brain.
You are his heir, through you he lives again.

While I claim to have swooped down on these fleas and pinched them between my fingers with an arbitrary hand, I am not quite telling the truth here, because who can resist plucking up a ditty with the swinging name of "Whigamaleerie," by a poet named Snoddie?

Oh what a pass we’ve reached, dear wife,
worn down by constant stress and strife,
the arguments like knife on knife,
**the world grown dreary.
Of all but gentler drums and fife
**my heart is weary.

Once, and counting this no fault,
I lived at a lick with hardly a halt.
You mind when I glaggered for sweet and salt
**and was hearty and beery?
But now I am wed tae the merciless malt,
**and oh, my dearie!

The Flea is stout with blood, and you may find Clive James and Ann Drysdale and Anna Evans and many another swimming about in its great blood-belly. Enjoy!
Posted by Marly Youmans at 10:01 AM

Email ThisBlogThis!Share to TwitterShare to FacebookShare to Pinterest
Labels: Paul Stevens, The Flea