Readings for the 12 Days of Christmas: Graham Ward 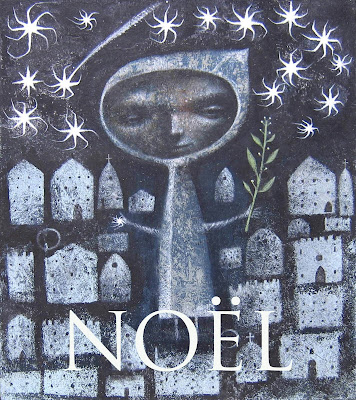 Merry Christmas, one and all--light and birth to you in winter.

As it is no doubt a day of much-to-do for most people, I am simply giving two links to the world of marvelous Graham Ward. The image is his electronic Christmas card, which I have pilfered from my email to pay him homage.

I met Graham through painter Clive Hicks-Jenkins, and we're planning a collaboration in the new year. His paintings have great sensitivity and charm, as does he!

One of his images jogged my memory back in the latter half of October--I went back to the Red King, about whom I had written a story published in Postscripts (UK) and began writing poems about him and the figure of the Fool, who has a place in Graham's work. Every now and then I get--receive? am given?--a sluice of new poems, but never have I gotten one like this. As of 2:00 a.m. this morning, I have written 66 new poems about these and other figures, all set in a world of their own. Who knows how many I will keep, but it is a delicious run of new work. It was Graham who made my mind turn to these figures, and so I am grateful for that impetus!

You may look at Graham's paintings and other work here. And you may read his words here. His self-description: Graham Ward was born in Bradford, West Yorks, and grew up in Sussex. He studied Fine Art in Manchester and Stoke, and is a painter and illustrator. He has been an archivist, bookseller and librarian for the past thirty years, and his specialist field of interest is British art of the 20th century, He has twice walked the Camino Frances to Santiago de Compostela in Northern Spain, and plans to undertake the Portugese route from Porto. He is currently operating a small cafe in Broadstairs after an abortive stint as archivist for the Dreamland Project in Margate.

He does not mention that he is working on a book about the walk to Santiago de Compostela, but you can find out about that and more via his blog.