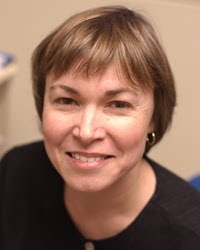 Twelve days, and then Christmas: as a lead-up to the day and as a kind of aerial gift, I'm going to post poems and excerpts from books that I read this year or am reading now or plan to read soon. (I have such a mighty stack of these that I may have to roll right on through the Twelve Days of Christmas.) I have many friends with new books, and some of these snips will be from their recent books.
The first (or counting down, twelfth) selection is from Kim Bridgford's 2003 book, Undone (David Robert Books). Kim is the bright star behind one of my favorite online magazines, Mezzo Cammin, and she is the new director of the West Chester University Poetry Center. She founded The Mezzo Cammin Timeline Project, a database of women poets around the world. Until recently, she was professor at Fairfield University, where she also edited Dogwood and was a faculty member in the MFA program on Enders Island. She is the author of four books: Undone; Instead of Maps; Sonnets about World Records (winner of the Donald Justice Prize); and the forthcoming Take-Out: Sonnets about Fortune Cookies.
I like what she does here with half-embodying abstractions with leaves and drifts (dead silvery leaves that lead toward her use of snow) and snow (blinding and blotting-out like a calendar with no numbers, endless, white), and I like how she turns upside down that old image of angels dancing on the head of a pin (attributed to the medieval Scholastics, probably falsely) to the pin point and pain. The tears on lashes link up beautifully, as natural as drops of moisture on a sprig of fir. After using rhymes that are almost entirely slant (and sometimes set so far apart as to be merely visual: snow/now, eternity/why), she closes down the poem with the knock of a firm rhyme that unseats us from earth and leaves us in a griefstruck realm of despair and air. Not a jolly poem, but Advent is a good time to think about eternal things . . .

After all your relatives have died,
There is nothing but the ache of dread,
Or worse: a savage emptiness around
The mutterings that you mistake for sound.
But they're just you--and what your mind believes
Is sorrow wrapped in sequences of leaves,
Like silver drifts of form. You find the past--
What never happened and what doesn't last--
Is like that. You don't know what happens now,
The calendar unthinkable as snow.
But at dawn, startled, you awake to pain
As if your family were dancing on a pin,
Your lashes full of tears. Who would know why
You're the one this side of eternity?
Every evening you are like the air:
Whispers of invisible despair.
Posted by Marly Youmans at 8:28 AM