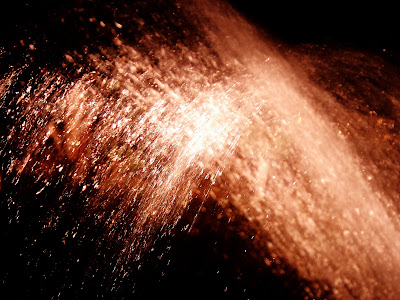 Illustration credit: I would like to thank sxc.hu and Mario Alberto Magallanes Trejo of Saltillo, Coahuila, Mexico for the use of the photograph, shot using car headlights and the spray from a garden hose at night!

* * *
Last night I drove with my elder son to see a wrestling meet at Mount Markham. My third child started wrestling last year and is a bit of a nut about it--he is altogether sports mad. Then this morning I woke him up at six to finish the remains of his homework, an essay and then a revision of another essay. Meanwhile, I was thinking about posting some poems about children.

For another selection from the galleys of The Throne of Psyche, I'll pick one short poem written about each of my children. I tend not to write autobiographically because I like the pleasure that comes with making things up, but I do have some small poems written for each of them.

This little poem was for my youngest, who is now 13. It's a good example of how you can make a poem out of anything. He was six and dreaming that his sister transformed into what I thought was called a Goldrick but see nothing of that name online; perhaps it was a Magikarp. At any rate, it was a dratted dream-infesting Pokémon, not a particularly appealing subject for a poem. It certainly does not leap to my mind as a potential topic, at any rate! It was originally published in Books & Culture.
TEARS OF A BOY, AGE 6


Waking, he tells the woe
About his sister--twelve
And slender like a bow,
Taut as the silk an elf

Is stringing. Glints of light
Declare he’s lame to halt
The arrow of her flight.
Birds say it’s not his fault.

The little sands imprint
Her passing feet--she is
More lovely than the tent
Of dawn. She is not his.

Sea pours against the world
As she transforms to fish
And leaves behind all girl.
The boy is caught by wish.

The sea’s a wilding stream
Of tears. Inside a shell,
Like a recurrent dream,
Her name echoes its spell.

This one I wrote for my daughter while she was in Hawaii. I suppose she was around twelve then (as she would have been in the prior poem as she grows away from her little brother and swims away). Pele's hair is formed when volcanic matter is tossed into the air and spun into threads by the wind. At this point she had already had a picture taken with parrots on shoulder and knees. First publication: Mythic Passages.
A CHILD AT THE TROPIC PAVILIONS


The smolderings of Pele’s hair
Are her delight, with fires
Of eucalyptus in the rain
And coral’s glowing spires.

A braided crown of palm adorns
Her buoyant curls, and leis
Of frangipani scent her throat:
She has no need of praise,

To sing of castles made of sand
And childish dignity
That takes the throne in Chinese silk,
With parrots on each knee.

And here is a more somber one that involves a major event in our lives, a time when our elder son was in second grade and in the hospital with meningitis. He came home from school feeling slightly ill and asked to sleep on the little couch in our bedroom. In the morning he sat up, looking pale and strange, and said that his neck hurt. With a great pang of fear, I recognized what was the matter. After his hospital admission, he remained motionless for seven days.

During his time in the first of two hospitals, the St. Francis' children's hospital in Greenville, South Carolina, a nun came in and asked if she could pray with me. I said "yes." During those moments while I held her hand, I received what I am only willing to describe--because there are some pearls in life that should not be strewn about in a careless way--a powerful revelation that included the knowledge that my child would survive.

First publication credit is due storySouth (in a special feature about poets who are Southern women, edited by poet Tara Powell.)


Is this mine? The child of stone
Or iron, the unmoving one?
Did I bear him in my body?
And has he been changed for good?
Seven days without a stir.

A nun appears to hold my hand—
I am listening to the words,
But I am also with the boy,
And I am removed, gazing up
Toward a shoal of golden light.

It has been gathering all day,
And I perceive that it is made
From thousands of my unshed tears,
A cloud of small gleam-catchers
That glints and floats in bleak twilight.

The gold grows heavy, and the freight
Of teardrops slides and spills as rain.
My heart’s torn between grief and joy.
The nun is speaking without stop.
I know in my bones, This child will live.
Posted by Marly Youmans at 9:11 AM

Email ThisBlogThis!Share to TwitterShare to FacebookShare to Pinterest
Labels: A Child at the Tropic Pavilions, In Extremis, Mercer University Press, Tears of a Boy Age 6, The Throne of Psyche