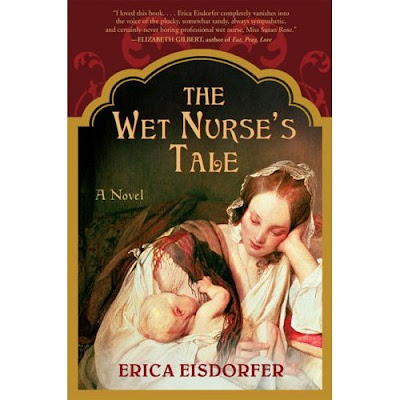 Erica Eisdorfer, born in Durham, North Carolina, was the first of the three children born to her parents, who had moved down south from the great city of New York and lived for some years in culture shock. The family rented a wonderful house edged by forest and she and her two younger brothers spent a great deal of time playing in the trees where she, due to her birth order and general bossiness, was constantly the admiral of the ship, the mayor of the town, the principal of the school. This sort of innocent play lasted only until her brothers, in what must have been a co-epiphany, realized that they didn’t have to take it anymore and went off by themselves to play with their trucks, leaving her alone forever. This is when she discovered reading.

That’s from Erica’s website for The Wet Nurse’s Tale. If you want to know how she met her husband Dave in the midst of enormous loss, hie thee to her page and read, for it is mightily entertaining and touching.

What her account leaves out is that Erica has been good to almost every author who has passed through Chapel Hill, North Carolina. No doubt she knows many of them well. No doubt many of them are fond of her. She is a great bookstore manager who makes sure handselling is not a dead art; she throws a good reading for visiting authors. Back when she was reviewing for UNC radio for eight years, she gave the most heartfelt and passionate reviews ever sent on radio waves. I feel lucky to have been reviewed by her long ago. I feel lucky that she hand-sold my books. I feel lucky that I met other writers and interesting people at readings that I gave at the Bull’s Head. And most of all, I feel lucky that we have been friends.

I knew when I met her that she had a book under the bed—several books, possibly. The Wet Nurse’s Tale is one of those books she quietly wrote while managing the Bull's Head and raising her daughters. Let’s hope there are many more that make it into print.

PUBLISHERS WEEKLY In her first novel, Eisdorfer offers as a guide to Victorian England her entertaining and surprising protagonist, Susan Rose. A bawdy young woman who could easily have walked off the pages of The Canterbury Tales, Susan ends up wet-nursing after getting unexpectedly and illicitly pregnant, and her alcoholic and abusive father forces her to leave her child and take up the occupation. Her journey into the intimate lives of England's upper crust proves an illuminating and dangerous one as Susan jumps from family to family—until her father sells her son. As Susan attempts to balance other peoples' babies with her quest to regain her own, she is faced with difficult choices between duty and love, and between her life and her child's. Whether she is carousing in the Jewish quarter or planning how to reclaim her son, Susan navigates the stratified social world with humorous vigor. A promiscuous, randy and hefty lady, Susan's a vibrant character, at once sweet and scheming, and given to such a crass frankness that even readers wary of historicals may want to give this a look.

From Carolyn See’s review in THE WASHINGTON POST: "The Wet Nurse's Tale" turns out to be informative, unusual and intelligent. Again, the strength of "The Wet Nurse's Tale" [is] in the common-sense character of Susan Rose, who is far from the received notion of bawdy, but nobody's victim, either. And also for the hundred little details about what it was like to keep a middle-class home going then, how a poor person managed to change her wardrobe, how the shopping got done and the babies got raised. The whole notion is light-years away from noblemen out on prancing horses looking for girls to ravish, but it may be a pretty good take on how people actually lived in those days. I liked it very much.

From The Wet Nurse’s Tale:
For a fortnight after Davey was born, all fared well. I stayed abed a deal and my mother brought me soup and porridge, and I nursed my child til he began to unbend a bit and his lashes unpeeled and shewed themselves. I loved little ones like this, with their head a’bobbing. And this one was mine! I thanked God for him.

He was strong for being so little, able to hold his head up very early. If I didn’t take care to swaddle him tight, he’d kick off the cloth with his scrabbling. At night, I placed him on a pillow so that he was like a gem in a ring and then took him to bed with me. When he woke in the night and began to bawl, I needed only to bring him to my breast and he’d suckle away very serious. Ofttimes, when he had just waked and was ravenous, his little chin would judder with the wanting. Every baby does this same; this one was mine and thus it seemed charming to me.
At first, my father had little to say about the baby. For a man as full of anger and ale as he, it seemed strange that he was quiet. I watched him, as he pretended not to watch me, and never left the baby alone for long. I did not know what he might do, and I trusted him not at all.

One day he spoke.

I had been waiting for it. “No, sir, not just yet,” I answered. “I will not lose another. I’ll wait til this one is set before I go.”

He growled. “And how long might you be planning to loll around, eating and rinking what all’s in the house?” he said, his lip curled like a nasty dog.

“Six months! And who’s to pay for you and your bastard?”

I looked at him straight. “Why father,” said I, “did you drink it all away, the money I sent while Joey was here dying”
Posted by Marly Youmans at 10:30 AM