"The Throne of Psyche" at The Green Toad Bookstore: a memorable night 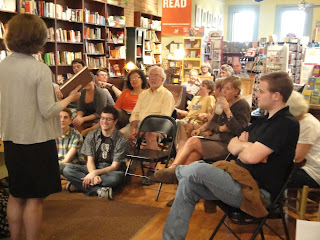 Last night we had precisely two dozen (counted by those bean-counters, my sons) people turn out to listen to poetry from The Throne of Psyche at the Green Toad despite the vacation (leftover snow day linked to Memorial Day weekend) beginning that afternoon and despite tornado warnings for our region. And I had a grand time! Lots of laughter and clapping and finger snapping and good questions and requests always make a reader happy...

Below you can see the other two people who turned out--Mrs. Toad of the bookstore a..k.a. K(C?)athy and me, wearing heels and so taller than somebody for once... I misled Mrs. Toad when she asked by saying that my name was pronounced "Yeo" not "You," and so she introduced me as "Marly Yeo," which meant that I gave her a big hug and we started with much laughter. My great-grandfather may not have been able to spell, but the family can still pronounce the name, even if we can't spell it!

Novelist Peg Leon brought me in style in a car with no little mountain forest mice (I fear the saga of the Toyoto Corolla invaded by mice is not over, alas), and afterward I went out to dinner with Peg, our painter friend Ashley Cooper (featured elsewhere on the blog), and Tina-whose-last-name-I-do-not-know, a painter employed by Golden Paints in Earlville. Interestingly, Clive Hicks Jenkins (who I just visited in Wales) uses Golden Paints. Tiny world, isn't it?

The world cracked open as we dashed from the restaurant in company with a downpour and thunderstorms. We scuttled to Ashley's car in pairs, huddled under flattened boxes, and Peg and I sat in children's car seats on the way to her car. Lights went out in Cooperstown and elsewhere about the time we left Oneonta, and in the pitch of dark we had views of wondrous lightning, scribbled across the firmament. Once I saw a great round ball of lightning, tethered to a wisp of bright fiber. We were stopped by fire trucks and a downed tree and power lines for a while and glimpsed another tree downed as we passed under our one traffic light, now gone dark.

Peg developed an elaborate theory, which has now gone out of my head, about how all this cataclysmic activity was extraordinarily good for the book. (Feel free to prove her right by rushing out to obtain a copy for all your acquaintances and any passers-by.)

At home, the living room was ablaze with candles... The house did not burn down, despite children playing with fire, and about six or seven this morning the lights flashed on. All is well. 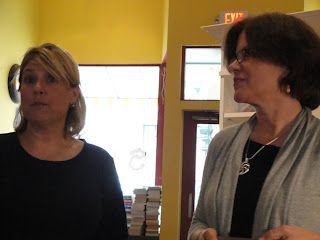 Email ThisBlogThis!Share to TwitterShare to FacebookShare to Pinterest
Labels: reading, The Green Toad Bookstore, The Throne of Psyche