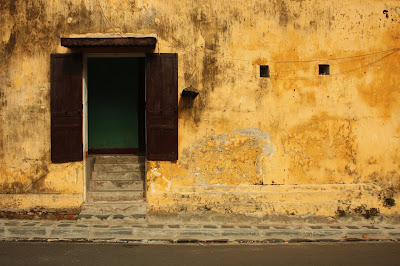 Here's a bit of Lenten musing on religion in Asia, Christianity in particular. Like any discussion of religion flung out into the world, it will probably find a welcome and scorn in equal measure. Feel free to comment, either way! And thanks to those who have written emails about Mike's journal jottings--pleased to have some notes from interested novelists and readers.

Christianity holds a funny place in Asia. We really thought it hadn't taken. Perhaps this was because Christian missionaries always seemed to do better in places with more primitive religious traditions. It seems to be easier to turn an animist into a Catholic than say, convert a Hindu, Muslim, or Buddhist. So while the effort was made, it seems to have been more of a pro forma operation. Translating some scripture, implanting some missionaries (poor, almost comic creatures in most modern westerners' eyes), building some small churches, in general "flying the flag" but not really opening fire with a cannonade of theological debate or forced conversions à la Cortez.

But after the colonial powers contracted, after Europe convulsed through two wars, after secularism became the fashion in places like Portugal and Scotland (once the hot, moist birth canal of missionaries), Christianity kept perking along in Asia. In some places, like Japan, it is mostly the educated, traveled upper class that embraces the Cross. In others places, such as China, it is the bon succor of the oppressed. In some places, like the Philippines, everybody is Christian. In Vietnam it is the faith of the middle class.

And they are not shy about their faith. In Saigon the most happening place on a Saturday night is not the night clubs like Apocalypse Now or Saigon, Saigon. It is the square outside the Cathedral Notre Dame. A rather large crowd gathers there at the heart of every weekend to pray the rosary for hours. Their Buddhist neighbors show up too, if only to watch or set up food stalls. And on Sunday morning the churches themselves are packed. The 9:30 a.m. service I attended held perhaps 1200 people, not counting those in the transepts or in the narthex. And new churches are being built all the time. The Church of St. Paulo and St. Pierre is just as large as Notre Dame and was only completed 6 years ago. And it was packed at noon. Packed.

So as Europe ages and secularizes, some westerners fret about the fate of Christianity. And I have no doubt that Europe will be Islamized. But since it will be a conquest of the already dying, I think that will be a hollow victory for the Muslims. Already, on any given Sunday, more Christians go to church in the country of China than in the continent of Europe. And the percentage of Christians is growing in every growing Asian state.

We owe this largely to the fervor of the Koreans. Much like the Irish of the Dark Ages, the Koreans have evangelized abroad during dark times, taken great risks and I would now credit them with a great harvest. They are still active and, along with Filipinos, are probably the most active force proselytizing among Muslims.

So if Christians lost, say, Sweden and gained China and India, who would not say it was a net gain? It only requires that we westerners understand that Christ is more than what we think he is. Perhaps we should be ready to accept him with an Asian face.

***
Photograph of a doorway from the "old town of Hoi An, Vietnam" is courtesy of sxc.hu and Dutch photographer Timo Balk of Melbourne, Australia.
Posted by Marly Youmans at 1:03 PM