Roberts, y. a., and other matters 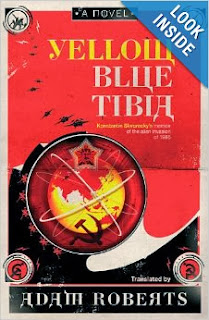 I like this post by writer Adam Roberts because it attempts to get out from under criteria established during Modernism as a way of evaluating and judging books—that’s very interesting, whether he is right in his conclusions or not. (That said, it's hard to get away from the desires and values of Modernism. Style matters to me, though I see it as a natural emanation of story. Complexity, well, I don’t seem to be able to escape being frequently perceived as complex, though I don’t think of my work that way. Experiment and novelty are of less concern to me simply because I don’t believe in the idea of progress in art. Flux and change, yes. Progress . . . I'll leave that to technology.) Roberts’s focus on y. a. books as capturing the spirit of the age is worth considering, and I recommend a read. He talks about the Booker and globalization as well.

And if you want to read one of his novels, editor John Wilson--a man who reads everything and so Rohas no doubt read all his books--advises starting with Yellow Blue Tibia. Roberts blogs at Sibilant Fricative, and I've just discovered a blog with his poetry at Morphosis. Go to his website for information about his books and other links and writings, including those of the piratical A. R. R. R. Roberts (The Va Dinci Cod, The Soddit, Doctor Whom, etc.)

Reasons other that having a big push from publishers must lie behind the wild popularity of Rowling and Meyers, and I’d like to hear exactly what Roberts thought they were—I tend to think of the Potter books as varying from other popular y.a. fantasies in being a counterbalance to the materialism of our era. Rowling tangles with all sorts of otherworldly threads (transformation, resurrection, alchemy, going down into various sorts of underworlds to find and bring back an essential article of power, etc.) and adds to them to a fecundity of invention. That's an appealing warp and woof for many. I haven’t read Meyers (did peek in the first volume out of curiosity) but did read John Granger’s argument in "Mormon Vampires in the Garden of Eden" that the books rise from a well of Mormon belief. Of course, he's gotten lots of corrective remarks on that one from Mormon critics, but the basic thrust of the argument is worth a look.

By the way, I never understand how so many people can talk so much about J. K. Rowling without ever mentioning the books of the late Diana Wynne Jones, to whom Rowling is clearly indebted in many, many ways…

P. S. Be sure and visit the poetry blog. I pasted a Roberts poem into this post and both sidebars vanished. I couldn't get them to return until I deleted the poem... Strange powers.
Posted by Marly Youmans at 9:18 PM