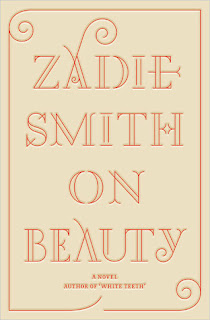 Here I am, up reading On Beauty and washing child no. 3's wrestling gear. He arrived home after midnight from the Center State meet and has to be up at 4:45 in order to make the "bus" (the three boys called back for another day are riding with the coaches in a car.) Anyway, the singlet and so on must be washed, and so here I am waiting for it to dry so I can then put in the heavy things and leave them to go round and round while I sleep, so that I in turn can go to the tournament later on.

Anyway, sons are on my mind because immediately they got in my way of reading On Beauty. Because even though I am a writer and two of my three children like to write very much, I read the opening letter with some astonishment because I cannot picture a son in our age who would write a long, news-filled, descriptive letter to his parent, no matter what the motivation.  Why? First, young men tend to be uninformative compared to young women. Second, my sons would never write a letter of that kind, even though they are the children of over-educated parents. They call, they text, and they will sometimes answer a facebook note. Let us say rarely. Third, they just don't see a longish, descriptive letter as a viable mode of communication. My daughter, in contrast, will write back and forth on facebook with me for a long time. But even she wouldn't choose to write that sort of long, organized letter.  Fourth, that business of the descriptive language? Detailed description? Boys and young men don't do a lot of that sort of thing. I would have to use surgical tweezers to get those words out of my sons' mouths. Fifth, when I make it to the second letter I can't believe any young man would say that bit about the kissing the little bit of skin visible on the be-hooded brother Levi's face. That's a woman talking!

But what it really does mean for sure is that, yes, there is no such thing as realism. This patently odd young man can go on writing long, lovely letters because he is a made-up creature, and whatever he chooses to do, no matter how fantastic, is right. I may well decide that he convinces me, despite his utter unlikeness to the usual run of boys, once again because of there being no such thing as realism. In this little bubble world, he may make sense, and his way of seeing the world convince me. Time, as is its wont, will tell me. And now, dear reader, I am falling over with sleepiness and have just put the second load in the dryer. Good night!
Posted by Marly Youmans at 1:43 AM

Email ThisBlogThis!Share to TwitterShare to FacebookShare to Pinterest
Labels: On Beauty, Zadie Smith