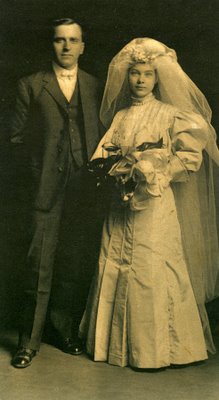 The wedding of my maternal grandparents, William Leicester Morris and Lila Eugenia Arnold, took place in the merry month of May almost a century ago--May 12, 1907.

The gown and veil are marvelous, but take a look at the magnolia blossom bouquet. This is one of my favorite pictures of my grandmother, right up there with the Japanese play and the Bible-and-pompadour photographs. I believe that she made the gown and headdress with veil.

W. L. Morris (January 10, 1869-September 22, 1955) was born in Washington Country, Georgia; he had a store in Collins, and he built public buildings and residences. The house he constructed for my grandmother is a major site in the world of my imagination and has appeared in a number of my stories. Fig trees, grape arbors, a towering persimmon tree, wonderful porches, raised house pillars, Queen Anne towers and porches, a well on a porch, outbuildings, and many other elements of that magical realm still are places to "go" in my mind.

He and my grandmother had nine children, eight of whom survived to adulthood. They could not have been more surprised by the last baby--my mother, the "miracle child." W. L. and Lila were old-fashioned pillars of their community, devout people who added a good deal of beauty to the world. They lived creative lives, my grandfather with his house-building and carpentry, my grandmother with her needlework and household arts. Her pantry was a wondrous thing. Their lives were very "dense" and full with labor, creation, gardening, child-rearing, and strong religious belief that gave shape and meaning to all else.

While the postwar era and depression meant that they lost much financially, what strikes me is that their acts and days were creative and fertile. What they made had usefulness and gave aesthetic pleasure. How much we came down when so many ordinary people gave up making things in the realm of "useful" and domestic arts--and after that came a time when we stripped away the beautiful and were left with the purely intellectual. And now we have the great effort to bring "a return to beauty" in the arts...

Lila Eugenia Arnold has already popped up on the Palace. She was born in Triplett, Georgia, August 17, 1883, and died February 13, 1968. She lived a long life, and although she was away on a visit at the time of her death, she was still living in the lovely house my grandfather built for her. Too many elderly ladies are toted off and stuffed into "homes." My grandparent's house began as a single room, where young Mrs. Morris would rock her first baby with a pistol on her lap. Times were wild in the south Georgia countryside, not so very long after the war.
Posted by Marly Youmans at 4:00 AM