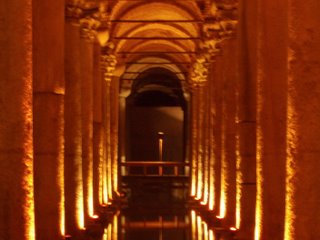 Tourists are people in shorts who can smile in unison.

Fat tourists are people in shorts who smile in unison with their knees turned together.

Delicacy is a fat man holding a porcelain tea cup.

A person never plumbs his genius and capacity for annoying the natives until he is made a tourist.

The picture above was taken by my husband in Istanbul this summer, when Mike and B were tourists there (yes, we are sometimes tourists, and if we eat too much, are liable to get fat--except N, who considered it a feat to break 50 lbs.); it is the underground Constantinople cistern, lost for a millenia and a half. The pillaged columns were mostly Greek, but the builders would have called themselves Roman. The cistern was 'found' when someone investigated a rumor that people living in a certain area of the city could pull up water and fish from holes in their cellars. When discovered in the late Middle Ages, it became a dumping ground for trash and bodies, but has once again been cleaned up.