Twigs on the family tree 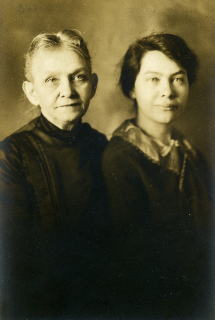 The daughter of Sallie E. Latimer and James Washington Hance, Sally Jo is my maternal great-grandmother. Born in Turin, Georgia on December 27th, 1859, she was the third of four daughters; her sisters were Blanch Corainne, Daisie Eugenia, and Mary Alice Elizabeth (called Mamie).

When Sally Jo was three, her father was killed at the battle of Gettysburg, while serving as Lieutenant Colonel for the 53rd Regiment, Georgia Infantry. He had earlier served with the 19th, and appears to have been made Colonel on the day he died, July 2, 1863. James Washington Hance never saw his youngest daughter, and Sallie was left with four little girls. She applied for a Confederate widow's pension in 1891.

Sally Jo Hance Arnold is buried with her husband in Greenwood Cemetery, Atlanta. In old age, she lived with my grandmother, Lila Eugenia Arnold Morris, and she died at our family home in Collins, Georgia on June 28, 1939. My grandmother is shown next to her mother here. More about her anon, because she appears in other strange and wonderful pictures...
Posted by Marly Youmans at 4:01 AM