R. T. (Tim)10:54 AM, March 15, 2016 I'm going to be bold (and I hope not rude) by making a comment (observation) and asking a question. (1) I've known a few poets in the past half century, and I've been impressed by their commitment even though their reading audience seems to be painfully small; (2) How can poetry now in the 21st century ever grow beyond its self-contained audience (usually academics, other poets, and a smattering of others) and become more commonly read by more people? Perhaps neither my observation nor my question are worthy of your attention. I'm just thinking out loud. 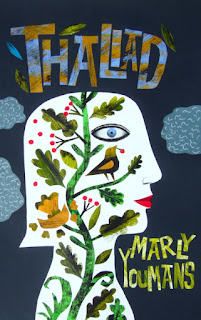 Not only is the audience for poetry small, the academic-realm support for the kind of poetry I want to write is even smaller--that is, I want to write something that is not a free verse lyric poem with a bit of narrative. I want to write in forms, sometimes old and forgotten forms. I want to use all the tools of Puttenham's "arte of English poesy" that were lost in time or laid down in Modernism. Occasionally I do something that looks like free verse, as when I fooled around with poems inspired by Yoruban chant. But it's still a running after shapeliness. For the most part, the academy isn't interested in such things, so that leaves me with the "smattering of others." (A large number of poets are ensconced in the academy, so I can't count so much on those other poets you mention.)

But I happen to think that a lot of the most exciting possibilities in poetry mean chasing the past and making it work for today. That's part of why I pursued a long epic adventure in Thaliad. (Interestingly,  that 2012 book still trickles along in sales, a narrow runnel but not yet stopped.)

I want the past--which contemporary scholars are busy ousting from our best schools--to go along with me. Get an English major without a jot of Chaucer, Shakespeare, and Milton? It happens. Spin poetry out of your navel instead of out of the rich gold of the past? Lack a proper humility in standing before the masters? It happens.

Little springlike shoots, desires for tradition and its magic and powers are cropping up in all the arts, I expect. In painting, somebody like Makoto Fujimura, painting in the Nihongan traditions, calls for culture care and the creation of beauty out of the ashes of destruction, a gift to the wounded and dehumanized soul. A devoted follower of the Old Masters like Jacob Collins says, “Those people who never lose sight of beauty and power are attractive. I’m trying to make things beautiful in a deep way. Poetic. Transformative. Mysterious.” A good number of my friends who paint, even when they are clearly children of Modernism, have embraced narrative and sometimes figurative work. Many of them seem like bridges between one thing and another, and some have moved (I'm thinking of Victoria Adams in particular) from something near abstraction to an enchanted realism.

The great transcendentals, beauty, truth, and goodness, are returning to us in various ways, though there are many who fight against their elemental powers. At times, they feel fresh and alive with energy once more.

You suggest that numbers in poetry are a problem. I am not so sure, though it certainly would be lovely to have more readers. Many a press has foundered over poetry's small sales. The "sugar'd sonnets of Shakespeare, among his private friends" were passed by hand (Francis Meres, 1598.) Later on, we know that Donne's poems were circulated this way, as were the works of many others. A small, beautiful work like Chidiock Tichbourne's "Elegy," written before his execution, may well have been dependent upon a single hand-written copy, though the poem soon made it into a book. Poems have survived their times despite small readership.

Was there ever a mythical age when all the world knew poetry? Perhaps not since the days of oral recitation by the fire, if then. What can we do? Well, schools could focus more on memorization and recitation and appreciation instead of dissection. (Need a written school assignment? Translate a sixteenth-century sonnet into your own words. Or write a sonnet, and then look at it two weeks later. Time tells all.) But how much needs to be done? I don't even know. I expect we might be surprised by meeting people in seemingly un-poetic occupations who read poetry--perhaps not contemporary poetry, but poetry all the same. Certainly it was not uncommon in the nineteenth century. And today there are elements of poetry in popular slams, rap, song. Do those lead young people on to better work? I have no idea. Maybe not.  But I'm not fond of the idea of shoving poetry down people's throats as if poetry were an intellectual castor oil.

Makoto Fujimura would say that culture belongs to all of us, and it is our responsibility to share what's beautiful and good. Surely that is true, and one thing we all can do is talk about the poems and books and art we love. I buy art, mostly by friends, and I buy books that I want to support. Often they sit a long time before I read them because I am busy with deadlines, but I buy them anyway because I know a purchase is an encouragement to the writer and an assurance to the publisher. The most destructive thing to a book is, after all, to be ignored. And some degree of that is the fate of most books, poetry or not. How could it be otherwise when only some minute percent of all writers are self-supporting, and when publishers choose and push the lead books of fiction and nonfiction?

Perhaps there's some lovely good in the idea that the best poetry, even in its loneliness and neglect, resists the current world where art is an expensive widget often fettered to ideology, where commercialism is god, and where utilitarian pragmatism rules. Perhaps that small, burning lamp--a gift to the world that mostly looks away--will continue to call to itself those who love the high play of language. Perhaps that readership will grow. As Mako says, art offers "our dying culture unfading bouquets, gifts of enduring beauty that we do not want to refuse." Poesy as posy: I, too, wonder who will accept that gift, those flowers.
Posted by Marly Youmans at 1:05 PM