You Asked, no. 15: collage strategies of Mary Bullington

In response to a request to interview some of my painter friends, I have been interviewing Mary Boxley Bullington. As she, in turn, insisted on interviewing me, a part of the You asked series is composed of our questions to each other. Soon I'll post an index to our conversations, as well as some information about how to see more of Mary's work, and how to get in touch with her.

Please click to see larger images. Note that some pictures are not embedded but at the foot of the post--all pictures mentioned are in the post. To see more of the Bullington-Youmans interview party, click on the appropriate tag at post's foot. To see more of You Asked, do likewise.

Youmans: As a collagist, you're a follower of a wandering muse, and you often completely revise a collage multiple times before you are satisfied. A visit to your two studio rooms shows that you have a bewildering variety of painted scraps and pieces in baskets and even littering the floor--small catalysts for the imagination. Clearly you often cut up and paint many times before you are finished with a piece. Ignoring for a time the realm of instinct and muse-ravishment, can you describe your methods in a systematic way?

Bullington:  6 Design Strategies in My Collages: A photo essay

For me, collage is a very versatile means of invention and of expression. Below are just some of the many approaches to the technique I've used—with images to go with them.

1. Overlap and Layering: Layers add dimension and texture to a 2-dimensional piece. In layering my collages, I consider what needs to be covered from the bottom layer, and what should still be visible. I like to let my petticoats show a bit.

The Red Tyger (2012) is a collage of figures cut from a drawing in India ink, acrylic and black gesso monoprint using an earlier version of this collage as a plate (technically, this is called a collograph). The blue-gray background of the collage is another collograph taken from the same plate. Thus the blue-grey shapes behind the collaged figures act as shadows. A new intensity and vibrancy in my layering of collages emerged in 2015: In my own Voice (Listen) adds one layer of collage over another, with layers of freshly painted pattern in between.

2. Repetition and Variation of shapes, colors, and textures create rhythm and harmony. The patchwork structure of the first draft of Antiquity (2014) allowed me to change elements until I arrived at a coherent collection of faces, each individualized and strong enough to hold its own, and yet congruent with the whole. Medallions, a collage made the same year, repeats two patchwork quilt patterns, circle and star, at least 15 times each without using them in quite the same way twice. Rectangles and triangles of different sizes help keep the solar systems in orbit. [See images slightly below in text, and the 7th image at the foot of the post.]

3. Sharp Contrasts in shape, color, value, texture, and pattern generate energy. Lady with Two Cats plays red against green, polka dots against batik-like patterns and near solids, and not least, the human creature against the cat. [See 8th picture at foot of post.]

4. Jigsaw Puzzling: Collage can be a sort of free-form jigsaw puzzle. I look for unexpected matches, places where I can create connection between diverse materials. To transform Leaves of Grass (2014) from a painting to a collage, I cropped it and then painted a sheet of paper with grasses in different colors and values so I'd have plenty of to cull from. The circular shape at the top invited me to add similar shapes from another painting. Fortuitously, one circular scrap had red, white and blue stripes—contrasting with the dominant orange; this added an American tenor to the grass theme—leading me to steal Walt Whitman's famous title for my collage. [Images 9-10 at foot.]

5. Surprise and lucky accidents create delight. As I work, I keep my eyeballs peeled for the apparent mismatch that is just right. If all I have when I'm finished is what I was aiming for, I haven’t gone far enough. I have to surprise myself. The Little Engine that Could (2015) first surprised me with the little blue train engine on the pink road. This gave rise in turn to the staccato of railroad tracks and the choo-choo rhythms that become a leitmotif throughout, and most emphatically at the bottom of the piece. The tree shapes inherent in the original patchwork structure and echoed in the skinny man at the bottom suggest a rudimentary landscape. The final surprise was finding the big red bird shape in the upper left quadrant to chime and rhyme with the smaller black bird shapes and avian lines scattered among the patches. In The Family Genome (2014), layering creates surprise. When I put on the orange overlay on the lower half of the mother's face the whole collage snapped to attention. The black, slightly pursed lips added point to the supercilious arch of her eyebrow. [See images 11-12 at foot.]

6. Incongruities and foreign elements: Surprise and incongruity go hand in hand, but while surprise is often a matter of sheer chance, incongruities are often a deliberate part of my strategy. I pierced my painting Flower Filigree so I could add an underlay—and then tried it atop a few pieces of painted paper. With Background 1, I was a bit bored—it was too much the same palette as the top layer. Background 2, full of larger, more energetic shapes and vibrant colors, brought new energy to the whole. [See images 1-5 at foot.]

7. Vision and Revision: Finally, collage is a very forgiving technique. It allows me to rethink and revise paintings and even collages that don't quite succeed. Though the number of choices it gives me can be confusing, collaging allows me to save the good, remove the bad, and rearrange the whole. Collage often reinspires a piece that is going nowhere. [See image 6 at foot.] In Tijuana 1953 (2011), I cut up and rearranged an abstract painting I'd spoiled, overlapping and reinventing the elements until they danced. 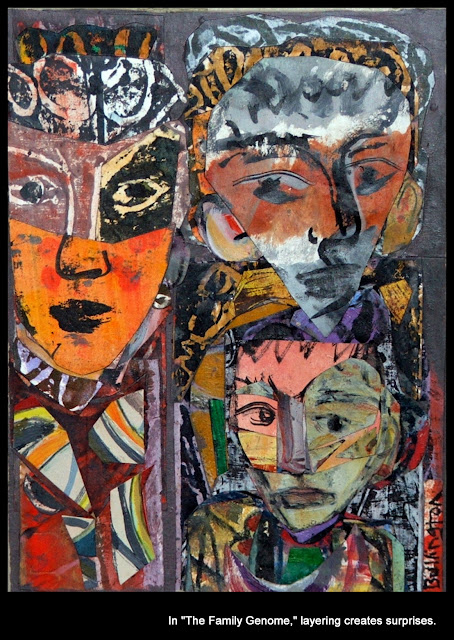