Hodgepodge for All Hallows Eve


And here's a little addition to the broken, monstrous, death-shadowed world we remember on All Hallows Eve from A Death at the White Camellia Orphanage: Pip in the broken world...

He wanted to veer and flounder away, lurching through the over-heated atmosphere.  But he could not leave Otto—what was left of him—under the white rectangle that could not protect a body from the prying bees and hummingbirds or the hands of strangers.  When he felt better, he would be able to sense whether his brother's ghost hovered in the air, rested in the dead arms, or was jailed and swooning in the perfume of the hedge.  Mr. Willie’s question came back to him as if in echo.
Yes, he suspected someone.  Who would do such a thing.  Yes, he feared their guilt.  Could see it shining, cracked and loony, in eyes.
“Speak up, boy,” Mr. Willie said testily.  He swung around to hawk and spit, and Pip saw blotches of perspiration on his shirt.
Oh, for the day a day ago, with his gaze sliding over a man’s shoulder, resting on his nose like the metal bridge to a pair of glasses, lighting on a mole below a cheekbone.  Those hours were swallowed up.  From now on, he would have to look everywhere and always until he found out what he needed to know.  He would be scalded in the hog-barrels and boiling kettles of men’s eyes.  He would have to learn to read the terrible enigma of their masks.  It was difficult; its mystery might take a lifetime to master unless he already knew all that there was to know—for now, all he grasped was that men were confessing some guilty secret.  He could see it shining out of sweat-slick features, out of irises that crisped his skin.  They were each found wanting.  As the preacher had shouted to them on Sunday, “We are every last one fallen short of the glory of God.  Every one! All fallen away from that righteousness!”  They were lacking:  Mr. Jimmie, Mr. Sam, the man with the gun, the man’s companion, and the purely foolish one.  Somehow they were bound up with the killing of his brother; he was sure of it, as sure as if he had seen the act.  And now he knew that wherever he went for the rest of his life, he would see a kind of burning in the faces of men and that until the day he died, he would never be able to look away from their eyes or from their secret knowledge.

All Hallows Eve / All Saints Day

Behold an image that combines the over-the-top creepiness of All Hallows Eve with the hallowed nature of the day--St. Benedictus from Paul Koudounaris' book, Heavenly Bodies. 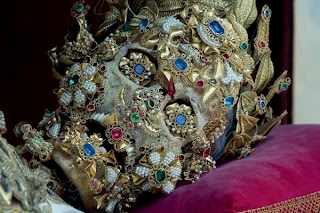 All Hallows tumblr
Murnau and a little Halloween soup
Posted by Marly Youmans at 3:51 PM

Email ThisBlogThis!Share to TwitterShare to FacebookShare to Pinterest
Labels: All Hallows