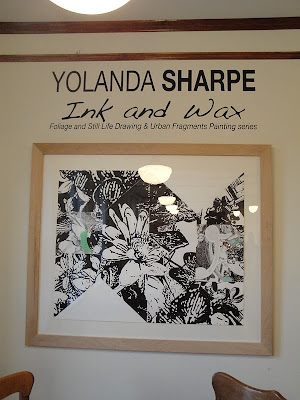 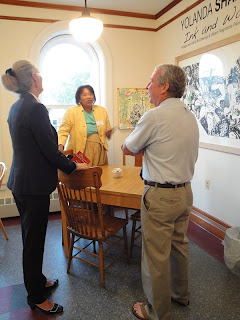 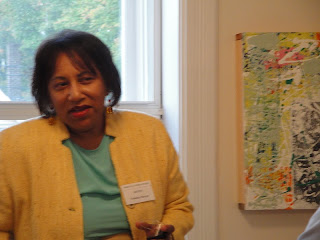 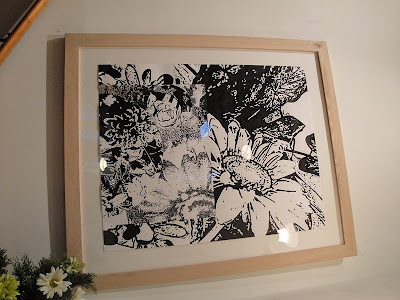 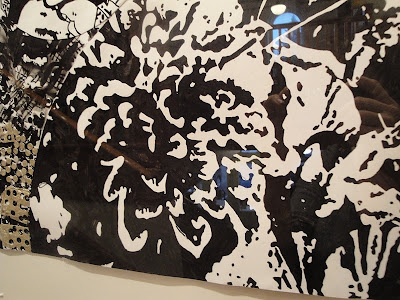 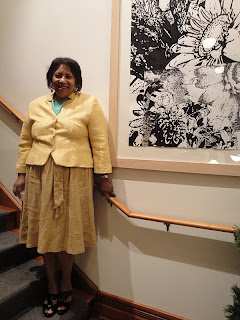 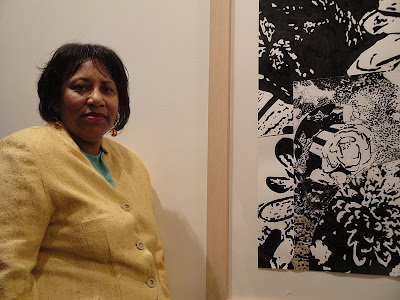 Note on the photographs:
I took these before the start and after the close of the opening to Yolanda's show in the upstairs gallery. The photograph of two artists speaking with two pieces from The Urban Fragments series shows Lee Yardley with the curator of the Painter Picks Painter show in the East Gallery downstairs at the Opera House. Unfortunately, her name tumbled out of my head... Two other shows are now on display, so a drive to Earlville lets you meet with the work of five artists. The Painter Picks Painter show features Steven Ginsburg, Sarah McCoubrey, and Gary Trento. In the West Gallery is Fleeting Dreams, a solo show of the paintings of Chun Arthur Wang.

Yolanda's note on her encaustics:
The Urban Fragments (2009-2010) painting series examines change and flux when urban environments experience loss. Many of the paintings are remembrances, my meditations of Detroit.  Some images invoke billboard image remnants, architecture, and the way natural forces impose upon change and neglect. Non-representational abstractions show visual fragments and cues. The encaustic medium helps to describe passages of time and layers of visual history. Paint layers, objects, and drawing remnants are derived intuitively. Also, Urban Fragments fuses drawing remnants (from my Foliage and Still Life series) with the paintings as objects with physical depth of colors and surfaces. I want the paintings to convey solid forms and shapes that are diaphanous and luminous. This series promotes colors than are pared down to vibrant essentials. While some colors are mixed and layered, others are blunt and vivid.

Yolanda's note on the drawings:
The 2008 drawing designs focused on re-inventions and improvisations by combining fragments of other drawn images. Many of the drawings are part of the still life tradition (using a collection of various objects from the home environment: glass, patterned structures, cloth, metal surfaces, ropes, and woven structures) and nature (foliage and various plant life forms.) Geometric spatial constructs helped to build the compositions and feed my intuitive approach of working. The dominant medium for this series is pen and ink, with some mixed materials.

The wedding of pen and ink with encaustics:
While I had seen pieces from each series separately, it was interesting to see the two groups of works brought together, since fragments of drawings crop up in the encaustics, half seen through layers. Meanwhile the drawings also work in a collage style with images cropped and fitted together, but they often utilize the idea of collage in a playful way. Yolanda feels that she works intuitively, but she brings to bear a keen intelligence and her decisions--while arrived at by instinct, perhaps--are clearly conscious ones.  Some of the selvages between fitted pieces appear almost invisible, and yet there are teasing faux selvages that are "artificial" or not selvages at all but simply (or not so simply!) the tantalizing work of pen and ink.

More Yolanda Sharpe:
To look at more of The Urban Fragments, go to my prior post on that series (including poems by Yolanda.)  Yolanda is having a big month for shows, as she is also included in the On the Mark group show at the Martin-Mullen Art Gallery (12 artists from The New York Foundation for the Arts Mark Program 2010, including Ashley Norwood Cooper of Cooperstown) at SUNY-Oneonta, September 6-October 15.  In addition, she has a large-scale watercolor in Watercolor Revisited: A New Perspective, curated by Linda Mendelson at the Wayne State Art Gallery.
Posted by Marly Youmans at 1:38 PM