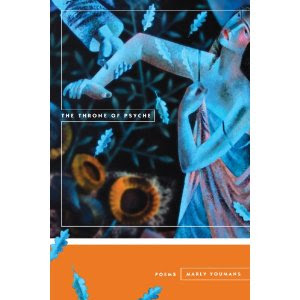 See that? That, my dear friends and well wishers and passers-by, is the design for the hardcover jacket and the paperback cover of The Throne of Psyche (Mercer University Press, April 2011.) The smashingly lovely image is by my friend (more about books with him in an upcoming post) Clive Hicks-Jenkins. The designers seem to have manipulated it--the image is flipped, which we suggested, but it also seems to have pulled the layers apart slightly to create more of a 3-D effect. In the process, the sunflowers go softer and the levels of image separate. Interesting. (Graphic design: Burt & Burt Studio of Macon, Georgia.)

The paperback is already listed at Amazon, and I found the cover first at goodreads.com. Speaking of goodreads, I joined today because my friend, the bookstore manager extraordinaire and author Erica Eisdorfer. She twisted my arm (note arm-twisting motif continued from cover.) Not sure why I avoided it earlier. Fear of trolls? Fear of even more shredding of time? Don't know. But I shall try it. See you there, maybe.

Be sure and buy several (or several dozen or more!) copies if you wish to save me from anxiety! Six books forthcoming: I can't figure out if that's bad or that's good in terms of getting them out in the world. It's a little intimidating.

Speaking of social media and books . . . I had come to the conclusion that facebook was a place mostly for utter frivolity and silliness (and not so much for bookishness) when I asked a question of poets about 1:00 a.m. this morning. I was working on my galleys for The Throne of Psyche. Tiny question: 145 comments. So maybe facebook is more bookish than you would think. Than I would think! However, somehow a blue paisley garter belt and a pink slip crept in before we were done. So maybe it has an insane and irretrievable bent toward the frivolous

I am making some podcasts for six poems due out at The Flea and qarrtsiluni. And am wondering: to what degree is multi-media the way to market poetry books. I hate to be thinking so much about marketing . . . and yet three poetry books will need a certain amount of push to fly off into the world, won't they? My friend Paul Tree (who is not really a Tree) tells me that multi-media is the way to go.
Posted by Marly Youmans at 9:42 PM