Readings for the 12 Days of Christmas: Lucid Rhythms at Epiphany 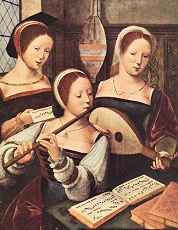 It’s Epiphany and the end of Readings for the 12 Days of Christmas. I entirely missed posting yesterday because it was a child-ferrying day, and I had a round trip to make to Annandale-on-Hudson. This trip is always curious and full of missed-road risks because it is a patchwork: West Kurley Corners and Lowe Road at Seward (which I missed this time) and River and all sorts of tinies out in the boondocks. But I must say that I always see the most fabulous sunsets on my way back from Dutchess County. Since I was still a bit under the weather, I read a bit and then toppled into bed when I came home without giving more than an “eh” to the Readings for the 12 Days. But today I shall toss in an extra poem or two to make up for it. I’m featuring another online magazine.

David W. Landrum is editor of Lucid Rhythms, an online ‘zine out of Grand Rapids, Michigan. David is a writer and “a professor of Humanities at Cornerstone University, Grand Rapids, Michigan. He has published poetry and short stories in many magazines and journals, including Web Del Sol, The Barefoot Muse, Driftwood Review, Small Brushes, and many others. He is currently at work on a series of poems about 16th Century English poet Robert Herrick.”

Here’s a poem of his that’s not from Lucid Rhythms but from Web del Sol:

Shoved side-to-side
by someone's hands—
God's, I'd have to say—
but my own too, since sometimes
I am hardly me—
loving out of pity, camel-considerate,
bearing the burdens of
someone else's soul.
No matter how they bunch
on one side or the other—
I mean the beads—
balance operates—my lacquered frame—
you understand—yes, it keeps me stable—
an equation—your gestures
adding, subtracting—
changing me at your finger's beck.
Ann Drysdale is invariably smart and amusing, and a grand wielder of British slang. She is an interesting poet to follow. This poem is sweeter than most I’ve seen by her, but it’s playful.
Ann Drysdale
Nuns, Skating
Nuns fret not at their convent’s narrow room
Because their spirits can escape beyond
The place that holds them in respectful gloom
To seek the Lord beside the frozen pond.
There He will make their laughter into bells
And turn their breath to incense. He will show
Shadows of magi on the distant hills
And flights of angels shining in the snow.
He will make rushes sing and grasses dance
To the intrusive music of their chatter,
Whispering in their ears that, just this once,
They too can walk as He did, on the water.
Oh, may the year to come be full of these
Small serendipitous epiphanies.

Forgotten your Wordsworth? Here’s the first “Nuns fret not”:

Nuns Fret Not at Their Convent's Narrow Room

Nuns fret not at their convent's narrow room;
And hermits are contented with their cells;
And students with their pensive citadels;
Maids at the wheel, the weaver at his loom,
Sit blithe and happy; bees that soar for bloom,
High as the highest Peak of Furness-fells,
Will murmur by the hour in foxglove bells:
In truth the prison, unto which we doom
Ourselves, no prison is: and hence for me,
In sundry moods, 'twas pastime to be bound
Within the Sonnet's scanty plot of ground;
Pleased if some Souls (for such there needs must be)
Who have felt the weight of too much liberty,
Should find brief solace there, as I have found.

Ann Drysdale is a British poet, born near Manchester, raised in London, married in Birmingham, ran a small holding and brought up three children on the North York Moors and now lives in South Wales. She was a journalist for many years, writing, among other things, the longest-running by-line column in the Yorkshire Evening Post, which she later made into a series of books. Her recent publications have included two memoirs, Three-three, Two-two, Five-six and Discussing Wittgenstein, both from Cinnamon Press, and a quirky guidebook in the Real Wales series - Real Newport, from Seren. Of her four volumes of poetry from Peterloo, the most recent, Between Dryden and Duffy, appeared in 2005. A fifth collection, Quaintness and Other Offences, was recently published by Cinnamon. She is also the current holder of the Dylan Thomas prize for Poetry in Performance.

I mentioned Paul Stevens earlier because he edits that imaginative ‘zine, The Flea. Caractacus has many moods, of which this is one:

Paul Christian Stevens teaches literature and historiography to senior high school students, and has widely published verse and prose in both print and pixel. He was born in Yorkshire, lives in Australia, and dreams of Catalunya.
Corey Mesler is productive and widely published:
Again to the Mountain
I asked the mountain my secret name.
I asked it to show me its mouth.
The day was hot like Easter.
Slowly, the clouds began to form a
story, one I had heard many
years ago and discounted. I raised my
hand as if to shade my eyes.
I raised it as if I knew the answer.
The mountain knew my wretched perfidy.
Corey Mesler has published prose and/or poetry in Turnrow, Adirondack Review, American Poetry Journal, Paumanok Review, Blood Orange, Barnwood, Yankee Pot Roast, Monday Night, Elimae, H_NGM_N, Center, Poet Lore, Forklift OH, Euphony, Rattle, Jabberwock Review, Dicey Brown, Cordite, Smartish Pace, others. . His first full-length collection of poems, Some Identity Problems, is just out from Foothills Publishing. His poem, “Sweet Annie Divine,” was chosen for Garrison Keillor’s The Writer’s Almanac. He has been a book reviewer, fiction editor, university press sales rep, grant committee judge, father and son. "With my wife I own Burke’s Book Store, one of the country’s oldest (1875) and best independent bookstores. I can be found at http://www.coreymesler.com/."

John Milbury-Steen
Incarnate Print
The empty space in space excelsus high
is safe but getting down to earth is nigh
impossible, so when they take a dive,
of all the stars that shoot their inner gem
to try to make it down to Bethlehem,
few falling rocks of ice or gods survive
intact, but fall while flaming forth as tinder
and hit the ground, reduced to smoking cinder.
Into the manger of incarnate print
have I here fallen hoping that I might
be beautiful or pleasing in your sight.
Give me your blessing and I shall not want,
else this blood in ink will then have yet
another incarnation to regret.