Readings for the 12 Days of Christmas: Gioia on Donne 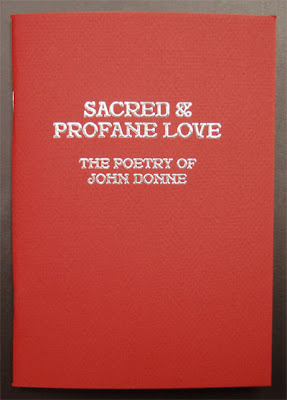 These early poems changed the course of English poetry.

Donne is conventionally categorized as the central figure of Metaphysical Poetry, a seventeenth-century literary movement that also includes Andrew Marvell, Richard Crashaw, George Herbert, Thomas Traherne, and Henry Vaughan. The works of these writers tend to employ elaborately extended metaphors, argumentative rhetorical structure, and intellectual language. Donne himself would not have understood the label "Metaphysical Poetry," or imagined himself as part of a poetic fraternity. Originally coined by Samuel Johnson, the term "metaphysical poets" was not intended to be complimentary. Johnson considered the group intellectually pretentious and emotionally inert--too much wit and not enough genuine feeling. For the three ce 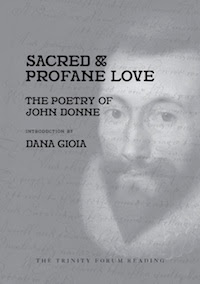 nturies after Donne's death, his poems were generally considered overly intellectual and elaborate, when they were considered at all.

One reason that Donne's verse perplexed many early readers was the sheer novelty of his approach. No one had ever written love poems (or later religious poems) quite like Donne did. His work fascinated some early readers--there were probably never many readers since his poems circulated only in manuscript until after his death. It would have been unseemly for a gentleman to publish his poetry. During Donne's lifetime only seven of his poems were published, and only two of those publications--his long, elaborate Anniversaries written in memory of an aristocratic girl he had never met--were authorized by him. Younger poets such as Herbert and later Marvell were deeply influenced by his example, but their admiration seems to have been a minority reaction. There was little in Elizabethan literature, not even Shakespeare, that would have prepared a reader for Donne.

Donne's chief innovation was to create a dense and dynamic style charged with an intellectual energy far in excess of the period style. His language is intimate and colloquial, but never plain or simple. His colloquialism is the passionate speech of a learned and inventive man speaking to his equals. This quality of colloquial energy is demonstrated nowhere better than in the abrupt and unforgettable first lines that launch his poems in a burst of emotional and dramatic energy:

For Godsake hold your tongue, and let me love . . .

What if this present were the world's last night?

One might make the case that Donne's colloquial style was merely an extension of Shakespeare's intimate if slightly more formal manner in the Sonnets, which were probably written about the same time as Donne's love poems. But Donne added another quality, his most significant innovation--a relentlessly argumentative organization. Donne began writing love poetry as if it were a theological debate. Before Donne, English poetry tended to be elegantly linear. The poet introduced an engaging line of thought and developed it by elaborating the basic notion. There might be a single turn of mood or perspective, as in many of Shakespeare's sonnets, but elegantly sustaining an idea rather than dialectically transforming it defined a successful poetic performance. In musical terms, one might say that Donne took the song-like form of the Renaissance English lyric and changed it into a symphonic movement.

Donne's poems progress by passionately sustained and ingeniously argued logic (or at least apparent logic). When he introduces an idea, he will most likely modify, overturn, or expand it in the next stanza. In so doing, Donne developed a formal procedure that gradually transformed the possibilities of English poetry--the notion that each stanza represent a new stage of a progressive argument. A single short lyric could now unfold a dramatic narrative as emotionally varied as a sonnet sequence. Reading the opening of a poem, one could no longer predict where it might end.

In addition to complex colloquial language and dynamic argumentative structure, Donne developed a third signature innovation, the so-called "metaphysical conceit" that so annoyed John Dryden and Samuel Johnson. A conceit is essentially a fanciful image or analogy that is elaborately developed to point out a striking parallel between two seemingly dissimilar objects. It is a sort of virtuoso metaphor or analogy sustained with bravado--like a tenor holding a high C. An example of a conceit is the title creature in Donne's "The Flea," a tiny insect who eventually carries a large number of meanings. The flea is, by turns, a conquering lover, a pampered child, a symbol of matrimony, a martyr to love, and finally just a dead insect. Donne expertly uses mock logic and sly humor to create a charming argument for seduction, though the reader probably feels that the poet's objective is less to bed the lady than amuse her.

In these early love poems, Donne created the modern lyric poem. Until Donne (and to a lesser extent his contemporary Ben Johnson), English lyric poetry had consisted mostly of songs or long sequences of interrelated short poems such as sonnets. Lyric poetry was a minor mode compared to the more commodious forms of epic or dramatic verse, and the idea of a complex, independent lyric poem did not fully exist. (Nor did lyric poems even have titles before Donne, Jonson, and Herbert; they were known only by their first lines or some generic heading such as "sonnet" or "song.") Basing his work more on classical Latin models, especially Horace and Ovid, than on English ones, Donne developed a lyric poem that presented a powerful human drama of high intensity and significance. These early poems changed the course of English poetry.
Posted by Marly Youmans at 8:30 PM