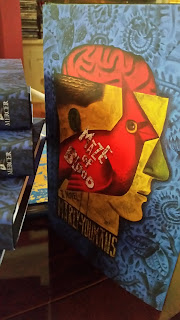 Two of the unluckiest things that have happened in my life happened on a May 20th, so I'm hesitant to mention this, as it closes on that date. I tend to dive through that date on the calendar in hopes that nothing bad happens.

But if you are a fan of Maze of Blood, you have the chance to vote on the book for a new readers' award. The book is currently a finalist for the Foreword indie awards in the literary fiction category--as were Glimmerglass and A Death at the White Camellia Orphanage, the latter of which won the Silver prize for fiction. Here is the page for my book.

Evidently voting is done by leaving a comment plus hashtag #INDIEFABFAVE; if you're a Facebook member and check the box, it'll also post a notice to Facebook. If not a Facebook member, I think that you have to create a Foreword Reviews account, an easy thing to make, in order to vote. Foreword says, "The book with the most reader endorsements will be named the INDIEFAB Reader’s Choice Winner." And that's the story. Thanks to any kind souls who fly that way and vote.


https://indiefab.forewordreviews.com/books/maze-of-blood/
And it's a two-post day; see below....
Posted by Marly Youmans at 2:40 PM

Email ThisBlogThis!Share to TwitterShare to FacebookShare to Pinterest
Labels: ForeWord Book of the Year Awards, Maze of Blood