Here are four after-dinner limericks, written while drinking a wee glass of Seven Kingdoms, part of the Game of Thrones series, product of one of our local breweries. Ommegang calls it a “hoppy wheat ale,” and it’s pretty good for an accompaniment to limericks. One would like a bit of hoppiness with a limerick.

I dare you to write a few of your own, with or without a Seven Kingdoms. Go on!

First up. No cartoonist can resist this subject, and neither can somebody daydreaming a limerick of the political persuasion:

There once was a brash billionaire
Who was blessed with abundance of hair—
Like a sweet guinea pig.
Or a polyester wig,
Or a billow of very hot air.

My natural bent tends to be apolitical, and I have to force myself to take “an interest” in the current slate of candidates. Luckily for cobbled-up interest, a traditional limerick should be a bit scurrilous….

Just imagine the spunk it would take
To be on the political make,
Always ready to hump,
To grind and to bump,
Like a frenzied, concupiscent snake.

Although I am not particularly a fan of politics, I am a fan of Emily Dickinson. Also frogs in bogs. And of fancy words in humble limericks. Dive in!

Dinner with the Stars
After Dickinson

How delicious to be a Candidate,
And to gasconade, guzzle, and prate
Like an eminent frog
In a notable bog,
For one hundred thousand a plate.

Perhaps 100K is a bit inexpensive these days? And here's a little bit about the jumble of promises abroad in the world in election year....

The Bait of Siren Songs

So you promise us borderland walls
And a passport to ivory halls
And no taxes, and we
Are to have health for free:
Like a Siren's, your come-on appalls.

Now it's your turn. Pay a visit to Limerick Town--it's a quick anapestic jaunt!

With forays into politics, always end on cake, if possible. So here's something sweet to end on: yesterday's pear cheesecake, made for Michael's birthday by our middle child. Was it good? Yes, it was! 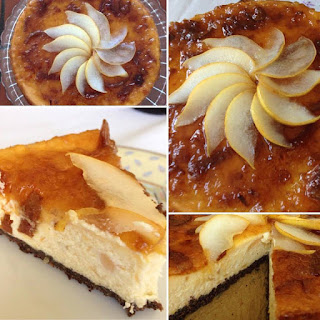