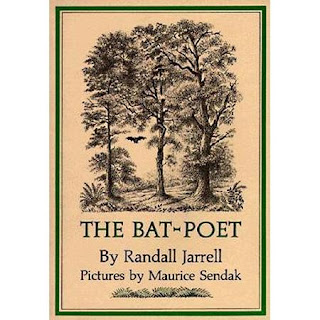 I've been thinking about Randall Jarrell, one of the poets I knew well as a child--I had a copy of The Complete Poems in high school (soon after it appeared--thank you, mother-librarian!) and knew them well at that time. He wrote in many different genres, and so I trailed after him into novel, children's books, and criticism. I believe his was the first criticism I enjoyed. I've been thinking about how strongly he felt about about the changes in culture, back in the 1950's, and how much of what he says could only be repeated or made stronger now. He was certain very able to empathize with the person (or the bat) who was lonely and desperate, longing for more in life and for change. ("Oh, bars of my own body, open, open!") And he thought that a poet's role was, in part, braving and living up to the lonesome idea that being misunderstood might be part of the call: "If you never look just wrong to your contemporaries, you will never look just right to posterity. Every writer has to try to be, to some extent, sometimes, a law unto himself."

Here's a comment from Suzanne Ferguson that shows how critical Jarrell was about the trajectory of cultural change. (Elsewhere, he lamented, "The climate of our culture is changing. Under these new rains, new suns, small things grow great, and what was great grows small; whole species disappear and are replaced."*)


The magnitude of what had been lost in American culture reaffirmed for Jarrell "the final, important, intense value" of art, of poetry for making sense of that loss. Paradoxically, his depression about the political climate, the devaluation of art in a consumer culture, and the plight of undereducated, oversocialized*** children created a need for him to write the tales, the now-classic children's books, and the late poetry in which he gives voice to the extraordinary feelings of ordinary people trying to transform their lives that are "commonplace and solitary." More and more it is the strength of this last creative work, after a struggle with what he saw as "ominous" changes in "the climate of our culture" (Sad Heart 86)*, that makes Jarrell a central figure in mid-century letters, one who cannot be relegated to the margins, where off "in a bright spot somewhere in the corner / Is the small radioactive planet men called Earth" (CP 333).* --from Jarrell, Bishop, Lowell, and Co: Middle-generation Poets in Context

*A Sad Heart at the Supermarket.
**The Complete Poems
***Somewhere he complains about American children being raised on applause, rather like current complains of an "everybody gets a prize" sort of schooling.

There's a grand bouquet of flowers to chose from when we think about American poets. But who is the most important critic in the states? It might be Eliot, though he left us. Or Auden, who is ours and not ours. But it just might be Randall Jarrell. I hope we grow some more poet-writer-critics of his kind.

The soul has no assignments, neither cooks
Nor referees: it wastes its time. It wastes its time.
Here in this enclave there are centuries
For you to waste: the short and narrow stream
Of life meanders into a thousand valleys
Of all that was, or might have been, or is to be.
The books, just leafed through, whisper endlessly.
--from "A Girl in a Library"
Posted by Marly Youmans at 12:21 PM