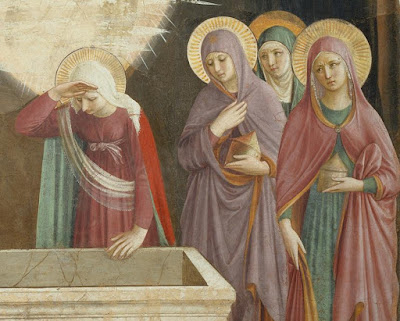 Update, 16 hours later: One thing I love about comments is that people say curious things, and then that helps me to know my own mind. Here's a bit of my reply to the ever-interesting poet (and more) with the alliterative name, Roderick Robinson, drawn from the just-prior post on Fra Angelico's Christ:


I look at Fra Angelico with a kind of relief, knowing that he would never, ever believe in "a senseless act of beauty," that beauty for him is always meaningful. So different from our own day. He's always so direct and clear and devoted to the art. Like George Herbert, he could have been much in a worldly sense but turned away from those chances. I admire that sort of understanding, one that sees so clearly what is important in life and what is not. And there we are veering closer to what you call "unfashionability as a virtue."

I'm too tired to think in words, so here's a little more Fra Angelico to admire--a detail from a fresco, "Resurrection of Christ and the Women at the Tomb" at the Convento di San Marco, Florence, 1440-1441. Public domain image. Here are some more beautiful San Marco images from Fra Angelico.

Here is how Giorgio Vasari describes Fra Angelico in his Lives of the Most Excellent Artists, Sculptors, and Architects:


He would not follow the ways of the world, but lived purely and holily, and was a great friend of the poor. He painted constantly, and would never represent anything but the saints. He might have been rich, but did not care about it, saying that true riches are nothing else than being content with little... To sum up, this father, who can never be enough praised, was in all his works and words most humble and modest, and in his paintings facile and devout; and the saints whom he painted have more the air and likeness of saints than those of any one else. It was his habit never to retouch or alter any of his paintings, but to leave them as they came the first time, believing, as he said, that such was the will of God.


* * *
Nancy Olson, founder and 29-year owner of Quail Ridge Books of Raleigh.
Requiescat in Pace
Posted by Marly Youmans at 12:08 AM