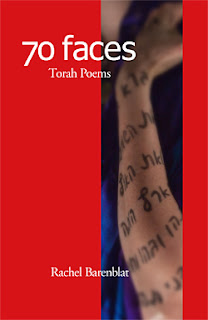 It’s easy for women
to identify with Korach.
Why should all the power
Reside in one set of hands?
Why shouldn’t we
be able to speak to God
on our time, lighting
our own smudge-sticks hearts?
Why should our bodies
need concealment, like
faces of the Holy Blessed One
hidden from creation?
Sometimes when we say this
the earth swallows us whole
like Persephone, eater
of pomegranate seeds.
Sometimes we emerge
Like spring itself,
Overflowing with the stories
We learned underground
And the plain walking-sticks
Of everyone around us
Burst into improbable bloom.
This afternoon I finished 70 Faces (Montreal: Phoenicia Publishing), the new book by the Velveteen Rabbi, Rachel Barenblat.  I recommend it.  Unlike many contemporary books of poetry, it has a large subject.  As the poet says, “The tradition of responding to scripture with our own creativity—writing interpretive stories which explore questions, close loopholes, and ponder implications—dates at least as far as the third century…”
And these are some of the thoughts and questions I had along the way.

Posted by Marly Youmans at 4:45 PM