The House of Words (no. 20): Dave Bonta and internet publishing, 1

Today begins a conversation with Dave Bonta, who is well-known for his many online enterprises, mentioned below. He also has several new print books, one being Ode to Tools from Phoenicia Publishing. Publisher Beth Adams says of that "Dave's popular blog, Via Negativa, contains six years of his almost-daily essays, poems, photographs and videos, but this is -- rather incredibly, considering the blog's breadth and consistently high quality -- the first book that's come out of it. Though he lives on a fairly remote mountainside in rural Pennsylvania, Dave is quick to point out that he's 'not nearly as handy as these odes might suggest' and that his favorite tool is the computer mouse. A writer of poems since the age of seven whose work has appeared in numerous publications, he's now the co-editor of qarrtsiluni online literary magazine and an author who has fully embraced the Internet but says he's 'way more excited to read these poems in print than he thought he'd be.' We hope you'll be excited too."

Dave also has a chapter of poems in the soon to be launched anthology, The Book of Ystwyth: Six poets on the work of Clive Hicks-Jenkins. This gorgeous, profusely-illustrated book will be launched with a reading at Aberystwyth University on May 6th, with all five living poets in attendance and Clive reading for the late Catriona Urquhart. I'm looking forward to meeting Dave in Wales and reading with him.

MY: You have a little empiry with qarrtsiluni, Via Negativa, Woodrat Photoblog, The Morning Porch, and Moving Poems (not to mention Festival of the Trees and other side activities I may not even see.) When and how did you start, and does your internet world just expand gradually in time, or have you had some sort of plan — is it simply wandering and finding new paths?

DB: Yes, it's been gradual and completely unplanned. I began posting things on the web in early 2003, as we were ramping up to invade Iraq. My first site was on the now-defunct Geocities. My only internet access then was a glacially slow dial-up connection at my parents' house. Prior to that, I had shared essays and occasional poems via email lists, so it felt like a natural next step, especially since some of the friends whose email lists I'd taken to hijacking — patriotic sorts sharing jingoistic cartoons and the like — were beginning to wise up and cloak the address list so I couldn't respond with a "reply all."

Geocities had no comment feature, so the only feedback was by email or occasional links from other, more widely read websites. Still, I didn't know any better and it was fun having my own site, with pages for homebrew recipes and forest issues as well as essays, which were in the lyrical-political style of Arundhati Roy and Eduardo Galeano. Had I not been on a slow boil about our war in Afghanistan and then Iraq, it would've taken me a lot longer to get an online soapbox, I'm sure, given that I am both very lazy and generally averse to change.

Friends started telling me about Blogger that summer, but like most literary snobs I turned my nose up at it, both because of the absurd and ugly word, "blog," and also because of what I was hearing about blogs in the mainstream media: that they were filled with worthless minutiae of people's daily lives and/or links accompanied by minimal, uninformed comments. It didn't seem at all attractive. When I finally did start a Blogger site in mid-December 2003, I called it Via Negativa in part because I had a chip on my shoulder about the medium, and wanted to see if I could take writing about nothing and kick it up a notch or two.

I am eternally grateful to Blogger for forcing me to learn HTML, and later CSS. The only way to get links in the sidebar back then was to edit the template, and Blogger didn't even have a native comments system yet, so like everyone else I had to paste in the code for Haloscan comments. Of course, once I got comments, it changed the whole equation. Now, I no longer had to leave the mountain to share ideas with like-minded people. Eight years later, I remain good friends with at least a dozen people I met in those first couple months of blogging, including my co-editor at qarrtsiluni, Beth Adams. Her blog the cassandra pages was a major water cooler, in those pre-Facebook days, for left-liberal intellectuals with an interest in art, religion, and culture. 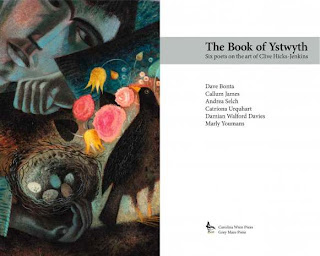 Email ThisBlogThis!Share to TwitterShare to FacebookShare to Pinterest
Labels: Dave Bonta, Ode to Tools, Phoenica Publishing, The Book of Ystwyth