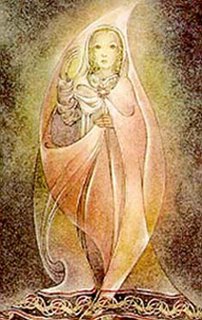 Templeton is one of those odd places where the past and present and the real and unreal get jumbled. I blame that on Fenimore Cooper’s literary shenanigans, but also on ghosts.

On Sunday it seemed that everyone wanted to talk about ghosts. F. S. talked about the laying of ghosts. E. told about the 900-year old European castle that was the scene of her childhood, a place stirring with spirits—one of whom told her that she would inherit 'the pin of the heiress' but be the last. A prophetic ghost. For here E. is, an American and no noble. A. told me about Mr. Ruggles, whose body lies in the Christ Church yard but whose spirit seems to have been exceedingly restless. Mr. Ruggles made many appearances at A.'s former home on Pine Street. And A. said that his wife, L., perceived more spirits in the house than he—seven, in fact—and that a girl who helped care for his mother once captured by photograph the dim image of a little girl in party dress, sitting in a closet. A friend brought over a Ouija board, and they quarried lots of information from the spirit world that later was confirmed as true; however, the then-rector of Christ Church told A. and L. not to do it again, and they stopped.

All ectoplasm and cold spots and haunted objects...

I’m going to have more to do with ghosts, I see. Story-wise, that is. They keep trickling in, and we’re almost hemmed in by them in the neighborhood, hard by the hanging ground and the oldest houses in town. Even the stone wall across the way has its ghost: an Iroquois kicking-chief. But I’m glad that our house hasn’t collected any extra inhabitants over the past 198 years.

Illustration by Sulamith Wulfing
"Fear," from www.artpassions.net
Posted by Marly Youmans at 5:22 PM